Bill and Nigel are now en route to Germany in the fully air conditioned Whippet. Summer is really over and they are doubtful if autumn actually stayed around for long either. They have comforted themselves by staying at the best hotels (the Promenade at Leijpaja), and eating at the best restaurants as they drive through Lithuania.

They left Lithuania by ferry to Germany from the port of Klaipeda. Now to drop in on the long lost Amann cousins in Germany. European Vacation, here we come. 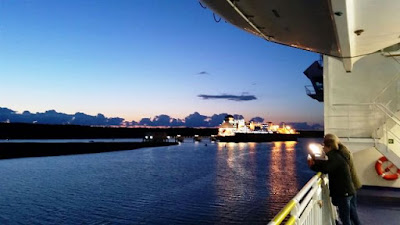 To Riga and more repairs

Almost "castled out" after three more 12th century piles in Sigulda, the "Switzerland of Latvia", eventually the Whippet gets Bill and Liz to Riga, a city that immediately charms them with its canals and elegant buildings, a Latvian St Petersburg. And a rendezvous with 2015 B2B traveller Nigel McCombe and wife Judith. 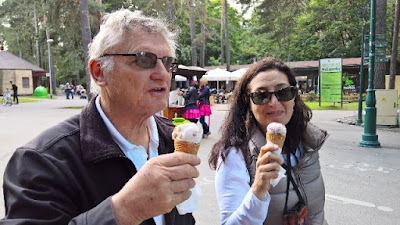 Bill has been able to contact the Riga Vintage Car Club and arranged for a mechanic (a real one) to do an engine overhaul while Bill, Liz, Nigel and Judith head over to Copenhagen to compete (and I use the word lightly) in a World Masters Rowing regatta. Their training has consisted of sitting either in a very small car for several hours a day, or in a restaurant drinking beer and champagne while eating gourmet meals and ice cream in Estonia and Latvia. Good luck.

Meanwhile Richard, the Riga Vintage Car Club's mechanic, gets to work on a re-bore for Stan the Whippet. 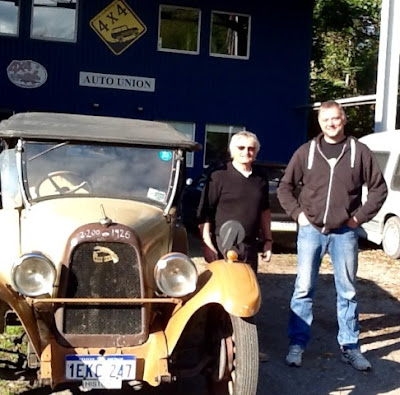 Posted by John McCombe at 17:15 No comments: 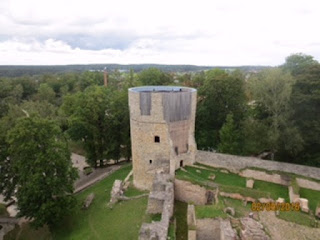 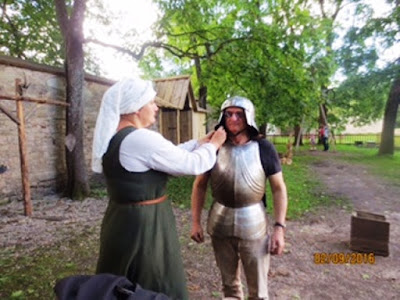 Posted by John McCombe at 16:53 No comments:

Meandering down to Latvia 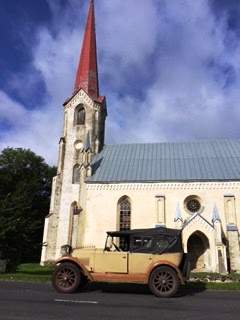 Avoiding the main roads where possible Bill and Liz headed south through Lihula in Estonia, eventually crossing into Latvia on a quiet country road. Note the border guards vehicle in the background. 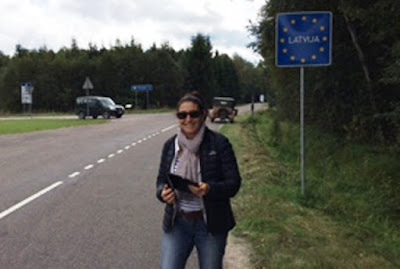 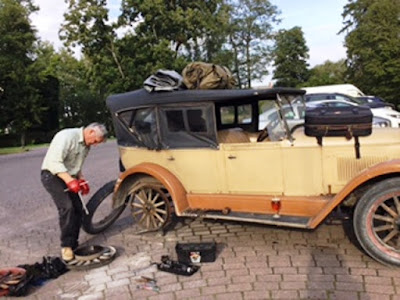 No sooner into Latvia than Bill is back in his element, fixing another Whippet problem. This time it provides an opportunity to check into the Dikli Palace Manor, hidden in the nearby forest, and another gourmet champagne dinner to celebrate Bill and Liz' 35th wedding anniversary. Bill's an old romantic. 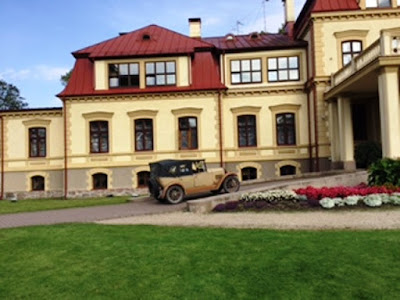 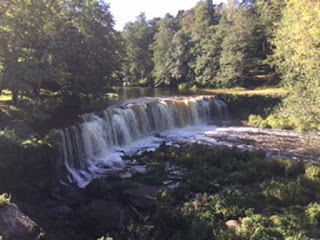 From Tallinn, down to the coastal town of Haapsalu, ON THE BALTIC. Old castles, rivers, waterfalls, forest, manor houses, and all summery green. The kind of day that really relaxes one. So much so that Bill, the bush mechanic who could coax a ninety year old, unrestored motor car, across 20,000km, through twelve countries across central Asia, showing ingenuity, knowledge and skill, along the road decides to fill the PETROL tank with deisel. Perhaps he was so unused to the car running smoothly that he decided to create a problem for him to fix. Who knows? 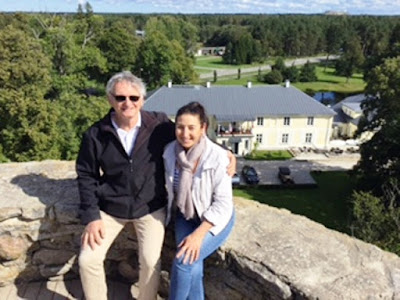 After an hour of draining and refuelling, Bill owed Liz a decent lunch. So it was rabbit pate, tartare of salmon, and creme brulee at the 17th century manor house next to the 12th century monastery at Padise. 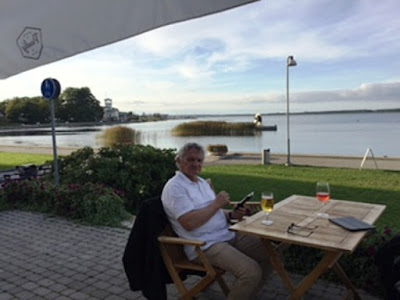 And finally, the Baltic.
Posted by John McCombe at 15:57 1 comment: 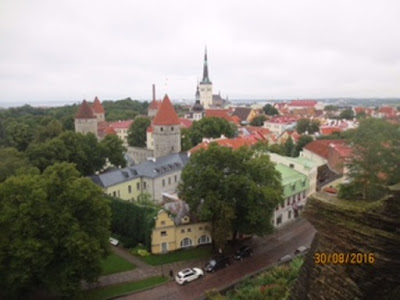 Summer ends early in the north. It’s September and it’s cold and raining in Finland. Bill and Liz take a quick drive straight to the Helsinki ferry terminal, a quick cruise over the Gulf of Finland, arriving in Tallinn in the same cold, rainy night, and in the leaking Whippet, find their way to a hotel. The next morning a clear hotel window view of Tallinn’s Old Town. And time for a bit of touring. 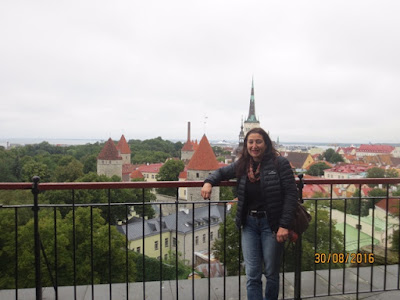 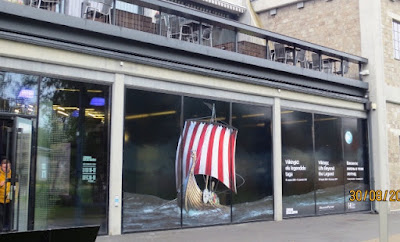 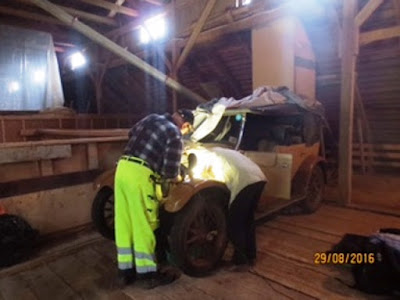 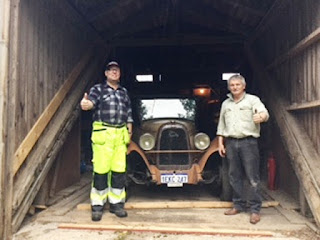 A cosy shed in rural Finland has been a welcome home for the past year. Then in August 2016 the shed doors creaked open and the little Willys Whippet blinked in the sunshine. A check of fuel, cooling and electrical systems, a bit of air in the tyres, wheels back on, and the 90 year old motor spluttered back into life.

This time it's on to the Baltic states, Estonia, Latvia, and Lithuania to finally complete the “Bondi to the Baltic” expedition. By an alliterative error we had previously misnamed our ambitious vintage car road trip from Australia to Finland (should have been “Hanoi to Helsinki” but for the Vietnamese government taking its leftist political system to the absurdity of even banning right hand drive cars), causing us to apologise to the Finns for misplacing them on a map of European seas. But now to the real Baltic.
Posted by John McCombe at 15:10 No comments: