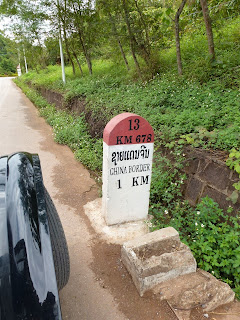 Ian tells: Oudomxay is a forgettable town in the process of being upgraded with Chinese money; first the curb and guttering and then the road. They are working towards Luang Prabang but just haven’t got out of town and it looks like the Lao government isn’t going to spend any of their money doing up the roads when someone else will.

Great surprise to find the road to Boten is a new two lane highway with beautiful camber and guttering. One hint of a pot hole and 2 two slight bumps on the whole trip. We counted them. Beautiful. The Whippet still boiled when pushed up hills, but Horace just moseyed along. The larger engine in the Dodge helps.

Boten is, well Boten was, a casino. Apparently some Chinese punters were allowed credit at the tables, couldn’t pay, and were detained by the Lao. End of story, now it’s a ghost town. Large hotels totally empty shops and stalls. We were the only fools to rock up to the hotel. No food and not a paper cup or glass in the place. Two hundred made up rooms covered in dust. There was a Thai developer there who was interested in the cars and had a team who were going to turn the place into a theme park. He had 6 tour companies in China and is going to bus Chinese down for the day for balloon rides, flying foxes, elephants, massage, lady boys, you know, the usual. He was talking 1000s a day on this international jaunt. At least the surrounding forested hills look good
Posted by John McCombe at 19:15