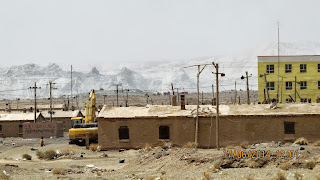 Huatugou to Ruoqiang was 340 km of stark landscape, with a sandstorm thrown in. The general bleakness was heightened by the appearance of a dust-producing asbestos mine looming behind a grim village, home to the mine workers.

We were delayed by police because of high winds and a sandstorm in a mountain pass ahead. Trucks with wide and wider, or long and longer loads were also halted.

After an hour and a half we were all allowed to depart. Ever tried to beat 50 semis up a hill? We decided to go last. A further steady climb to 3600m, then the wind came up, or we arrived at the scene of the sandstorm, so we put the curtains up on the offside of each of the cars and continued to crawl up the hill. Then a long descent through gorges to 1200m, followed by a straight flat drive of 150km. 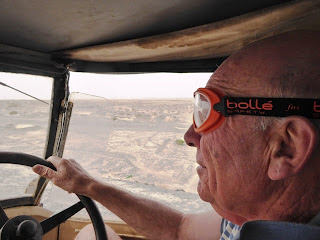 This started off well until the wind swung round, gusting to 80 km/hr, blowing sand across the road into the cars, as well as every crevice in the body. Windows went on the other side of the Dodge, but the Whippet ploughed on. After 150 km of this we arrived at the cross road of the northern and western highways.