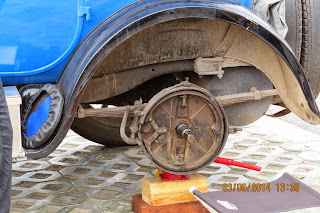 An early start from Dujiangyan got us onto the 213 motorway, heading north for Songpan, about 250 km away. We hadn’t noticed, however, that the Dodge had been hiding its pique at the press coverage accorded the Whippet, what with a radiator and a wheel being flown in from Perth, attracting excess baggage costs of $US30 per kilo. Horace does a lot of photographic work, what with the new paint job and all, but Stanley’s array of medical conditions had been racking up blog column inches, so Horace decided to jack up.

A wobbly wheel bearing just got worse and at Mao Xian, about 100 km up the road, he just struggled into a parking lot and stopped. That was it. Wheel off, bearings revealed, had it.

The Toyota to the rescue. Ian, Gerry and Andy are now on a mercy dash about 170 km back to the big smoggy city of Chengdu, a place that Ian swore he would avoid, to try to find replacement bearings. Bill, Pete, Rex and I are slumming in probably the best hotel of the whole trip, at $AUS50 a night, twin share, here in Mao Xian. 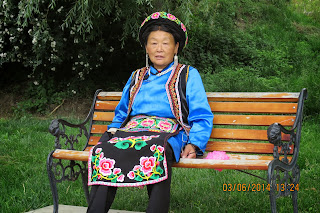 Mao Xian is the centre of the Qiang national minority, a people from the region of north west Sichuan, bordering Tibet, the area worst affected by the 2008 earthquake. They have their own colourful dress, as well as their own cuisine. This beautiful lady was happy to put down her knitting and pose for this photo. We’ll try the cuisine this evening.