Russian Hospitality with the Common Person

We have been overwhelmed with examples of hospitality and generosity from the people we meet in our travels in Russia. We are given time and an ear and nothing is too much trouble.


I went into the science museum in Yarislavl and was told they took groups through, so go and have a cup of coffee until the next group is ready. So I did and the staff in the cafe were having coffee and pizza and they invited me to join them. I had a chat to Julia and Helen. Paul, a science teacher, decided that as he spoke English he would give me a tour as it’s really a house that tries to explain some of the laws of physics to kids. So he did. 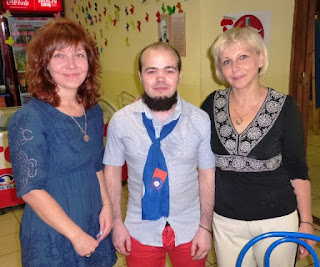 In the City Museum the same happened. I could not leave until I had seen it all this way then that. Look, we are putting on a film in a minute, here’s a book in English. Ekaterinburg city museum was similar.  So was Kirov and Perm.

Road side sellers are just as friendly, wanting to know why and where we are going.

I had some postcards I had been carrying for a day or two looking for a post box. I spied a post van stopped beside the road. The driver was having a rest in the sun. Would you put these cards in your truck please? No problem.