Who put the ‘Y’ in Ekaterinburg? 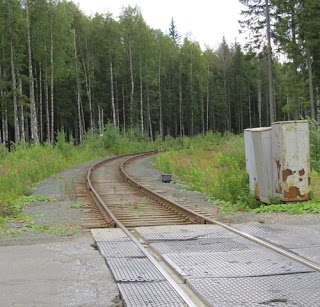 To reach Ekaterinburg (pronounced Yekaterinburg) we travelled over 400 km from Perm through the Urals including visiting Perm-36, a former gulag about which more separately. The gently undulating, well paved route is largely forested with fir pines and birch trees interspersed with occasional green fields of grass and wildflowers, a multiplicity of power line corridors, exceptionally rough railway crossings and rare waterways. 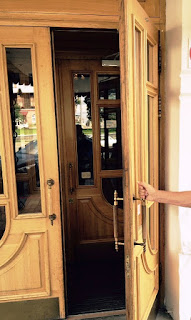 With the temperature decreasing, it became clear we were heading into cooler climes, Ekaterinburg being located in Western Siberia. For any skiers, the direct give-away is the double entry doors for accessing buildings as in ski field facilities (see photo with John being unusually courteous). Given the current cool but pleasant conditions, I have serious difficulty imagining the harshness of winter in town and particularly the bleakness and isolation of the countryside hamlets with their small wooden houses.

Since, dear readers, you are all familiar with the distasteful demise of the Romanov family in Ekaterinburg (and truly appalling it is in the detail), I will mention another aspect of the city not well covered in “The Lonely Planet” or in Wikipedia. The Historical Museum has the most tasteful men’s toilet I have ever had the opportunity to utilise (I can’t speak for the ladies). 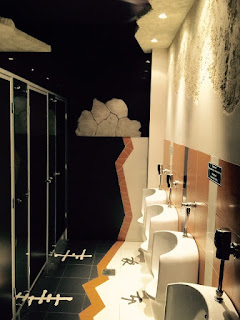 This museum, in line with just about all that we have visited so far in Russia, is tasteful, thoughtful, very innovative in its presentations and informative up to the point where language difficulties cause frustration. There is substantial pride and care in these well attended facilities. Ekaterinburg is our first city where some effort appears to be made in the museums and galleries to provide a modicum of English and this is mirrored by somewhat easier communication in hotels and restaurants. 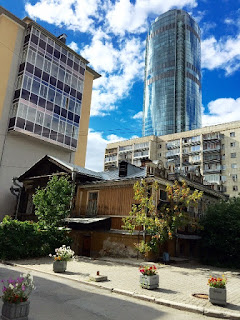 Since a short blog piece can hardly do justice to this very diverse and absorbing city, ranging from its’ collection of crowded, rundown, poor wooden cottages and grimy industrial areas in the outer areas, then a multitude of old and new high rise residential blocks, to an impressive but still mixed era central city precinct, I have included a photograph that attempts to capture the old, the Soviet period and the ultra new.

Editors note: Dr Leggo's opinion of the Romanov incident is one on a spectrum within the crew.
Posted by John McCombe at 15:56