Back into the Kyrgyz mountains 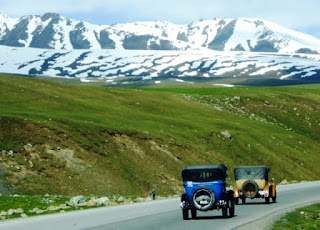 The cars rolled out of the Asia Mountain Hotel in Bishkek (highly recommended) on Wednesday 27 May, heading south towards Osh and the Fergana Valley across two mountain ranges. Bill had put a fuel regulator in the Whippet but it still wasn’t pulling properly, using a lot of fuel. Large snow-capped mountains loomed. The Otmok Pass is at 3326m, and it’s not quite Spring in the mountains of Kyrgyzstan. We found out last year that Kyrgyzstan, at that altitude, has only 3 seasons and Summer isn’t one of them. We climbed slowly for a few hours through the occasional herd of horses being driven up the high pastures for summer.

At the top of the climb was a tunnel. It was cold and windy so we kept on towards Otmok, suggested to us for overnight accommodation. The trip down the mountain was steeeeep. The Whippet with its hydraulic brakes tears down the hills. The Dodge with its band brakes goes very slowly varying from 1st and 2nd gear to try and keep the brakes cool. 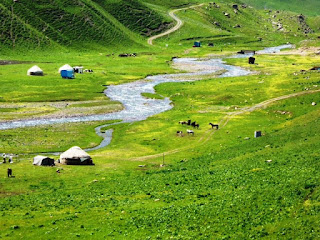 Regardless they were smoking at the bottom and needed some water to put out the fire. The local herders were erecting yurts for the summer in the chilly winds blowing off the snowcaps on either side of the valley. We considered camping. Five of us in a tent might be warm and there were plenty of camping spots available. A No vote.

Otmok village is at a windswept 2700m with a few wooden and brick houses. Ian, Bill and Gerry are veterans of the 2014 leg of the trip. Warm, friendly yurts and homestays had endeared the Kyrgyz people to us then. Michael and John joined the trip in 2015 from Sydney’s North Shore. Outside long drops, no wifi, sharing a room of double bunks and eating what the locals eat came as a shock. Mutton stew (many of us grew up on it), cucumber, great bread and local beer filled us all, except poor John who abstained and wanted to go home. A drop or two of duty-free whiskey and any imagined discomforts faded. The nearby mountain stream provided an alternative melody to the snoring.

The next day dawned bright and chilly, not a cloud to be seen but lots of snow on the high hills and passes and no sign of summer. We started with an easy steady climb in 3rd gear for the Dodge to the Ala-Bel Pass at 3175m followed by the inevitable steep descent. Another slow descent for the Dodge, using each of the three gears, depending on the slope, trying not to use the brakes at all, miles behind the Whippet. Brakes alone would not stop the heavy, well-loaded Dodge, and there are only the occasional safety ramps. So it was a very slow and very steady descent.  We got there safely, into a valley of wildflowers, habitation, honey then fish sellers as the river got wider and the land was less steep.  We reached Toktogul and another homestay (Trip Advisor recommended, $AUS70 for 5 beds and 2 meals) near the huge Toktogul reservoir. Only a few more steep descents until we get to Uzbekistan and hopefully we can forget the brakes till we get to Georgia.

By Mr John McCombe, who alone is responsible for all comments and editorial content of this publication and no one else.
Posted by John McCombe at 09:30