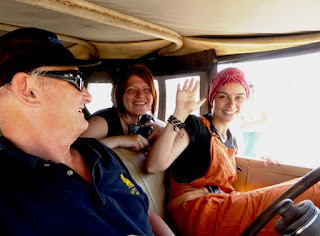 Crossing from Kyrgyzstan into Uzbekistan we were approached by a group of young backpackers. We actually found space for 5 more adventurers and their luggage. Ian put 3 large backpacks in the Dodge, Bill took 2 young Muscovites in the Whippet and the Toyota had the balance of the luggage and 4 in the backseat including our guide.

Some really interesting young people; 3 from Moscow, 1 from the part of The Ukraine where the fighting is happening and a really sweet 19yo Yakutai from the Republic of Sakha which I learnt is part of Russia in the far north east of Siberia where she said it can get to -80 F in winter. One of the girls from Moscow is a pharmacist, another a Moscow Uni graduate now working with Syrian and Ukrainian refuges, against the wishes of the government and a young man about 28 who was an independent freelance opposition journalist who needed to leave as it was too dangerous for him to stay in Moscow.