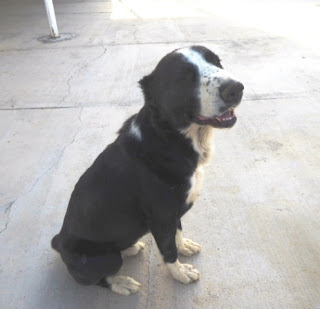 On the way to dinner the other night, at a truck stop half way across the desert, I met a nice dog, a nice big dog, nice big very friendly dog with a huge head which counter balanced the you-know-what knots at the other end. The head was big and flat with blue specks in the white patches, something like a heeler with big feet, with the same markings, and a particularly large muzzle full of teeth, slightly out of proportion with his huge body. He looked pretty interesting: no ears, no tail, pretty mangy and very unkempt. I stopped to have a word: “You’re a particularly ugly dog” I said in a strong voice and used the universal dog sit signal taught to me by a special dog whisperer, an upturned hand not too close to get bitten.

He sat down to put me at ease as he was a very big chap of possibly 50kg and quite scary looking, more so if you haven’t had rabies shots which were recommended for this part of the world. He held out a paw to shake hands (which is very important here as a proper greeting) and he told me his story – a pretty impressive story for a dog in the middle of the desert but pretty representative of the Turkmen.

He was born somewhere between Russia and Afghanistan, and Iran to the south, on the Silk Road actually, flat lands which are basically deserts that run goats, sheep (now only 3million) and half a million camels, not too dissimilar to the outback Oz, but ironically we have a lot more camels of course. I thought a reasonably short straw for a dog in a country that doesn’t really like dogs and cutting his ears off is a bit over the top I thought. He explains in a diplomatic way that jumping to unfounded conclusions about their customs isn’t quite right. This became clear later, he didn’t really care about his ears, he didn’t really care too much about the superficial.

He was bred for a tough life, but some overall purpose. The tough bit started young, not too long after he was born they cut his ears and then his tail. Not a real good day. He thought that was pretty good because they left the other bits and he had heard what they do to little boys in some parts of the world. I will take the ears any day, he thought. His first job was actually child labour but he worked with his family and basically had a good time and got fed too. They all worked together in looking after sheep and goats, a nomadic type of life like all the early Turkmen prior to Soviets. He and his brothers had to fight off jackals, wolves and foxes to protect the sheep and his owners who actually like him and loved the horses. The lack of ears and tail was quite handy as the wolves cannot get hold of them. Same with the tail, and he can’t remember it happening anyway, so why sweat the small stuff. Fewer grass seeds too.

Plov is a Turkmen dish made with rice vegetables and meat certainly good in winter where it may get to minus 40C, generally made with lots of oil. These sheep can withstand pretty tough conditions, similar to Australia but much colder in winter, they have the daggiest looking coats but are not grown for wool. This dog can certainly see the positives and is very friendly and content with his position.

His best job has been with the fabulous Turkmen horses, certainly the best looking horses in the world with golden shiny coats and incredible stamina, not dissimilar to the Arabian horses in looks. The Turkmen respect and value the horse far more than they do in Kazakhstan where the horse is raised for the lean meat. These horses, as history goes, helped them defeat the Russian expedition of 1879 where the fast moving cavalry did over 10,000 Cossacks. Pity the Russians paid the penalty the next year and killed most horses in the country not to mention the Turkmen. This dog’s got a long memory.

Since independence and his secure position with sheep has finished he has split up from his family and has to grub (bad pun by dog as this is a name for rice soup) a living from looking after the yurts and occasional vintage car at the truck stop. I think he was happier under Soviet rule with security, a good education and strict rules to work, but he’s not a capitalist dog. By the way he says don’t worry about the car as none are stolen because up to five years ago car thieves were hung and people have not got out of the habit, as he ate the chicken from dinner

He reckons he is related to an Italian type of dog that came through here in the thirteenth century called Marco but I think he may be related to Chengis like everyone else in this part of the world. He also tells a good story like the lion, witch and wardrobe that comes from here. He never told me his name but it could be Ashlan. The cars were still there in the morning.