Samarkand, Then and Now, by Ian Neuss 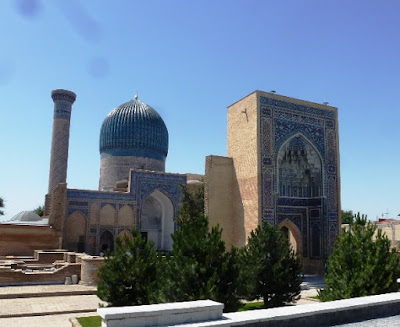 My first trip to Samarkand was in 1975. I was on the Trans Siberian Railway and taking side trips to various places, all organised by the Russian Intourist agency, and paid for in advance in US$, right down to every meal. You got a book of tickets for breakfast, another for lunch and another for dinner, for every day of my trip.

It was December 1975 and cold all the way. I had been working in Indonesia and had to buy a coat in Japan for the trip. I had flown to Samarkand via Tashkent from Novosibirsk, where I had got off the train. I remember it well as I was met off the plane by a lovely dark haired Uzbek Russian guide, and I was the only one travelling at that time of year.

We went to Tamerlane’s Mausoleum and the local bazaar, and a city tour. I got the state-approved tour. The mausoleum was huge, in a bare area with the famous blue tiles on the roof, but little else. Today it’s been restored, polished, paved and decorated, and there are lots of domestic and foreign tourists plus people everything nearby. I stayed close by in a Soviet hotel, on a floor with a babushka who logged your entry and exit and took your key. After a day tour I think I ditched the guide saying I had a cold (which I did) and would stay in the hotel. I remember roaming about the bazaar and the mausoleum later by myself and being taken underground to see the tomb by local kids. That is not possible today. The bazaar was great and full of locals who all looked like Genghis Khan. 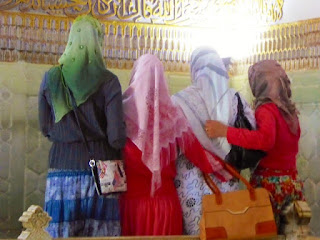 It’s changed today, lots of colourful women selling goods in stalls, much more organised and a greater variety of goods. Everything is new and bright and restored. There are shops full of goods lights everywhere. Cars, taxis, buses and people on the streets, domestic tourists in abundance. Colourful clothes on both sexes, smiling faces, and restaurants full with people enjoying themselves.