Samsas on the Road, by Ian Neuss

On the road we tend to eat when and where we can and whatever we can. So far that has not led to any disasters mostly due to the build up over the years of a wide variety of bacteria in our systems and having kept clear of these new antibacterial hand-washes to protect our natural resistance. But that’s another scientific experiment blog brewing. 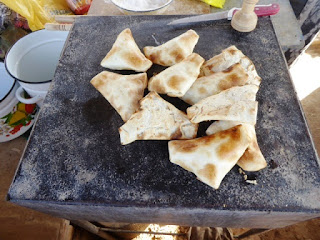 I have found samsas to be delightful and a good road food. In Samarkand Bill and I were off early to service the cars and passed the corner samsa maker and picked up four samsas made from puff pastry. These, straight from the oven, were the best we have had so far. This fact is supported by the constant occupiers of the four roadside tables outside the oven. We also found a lunch spot in Bukhara that made alat samsas and went back there a couple of times and got vegetable-only ones as well as the usual mutton ones. A great flavoursome snack. In Nukus we had round fitchi that were not enjoyed by all as they are very rich in mutton fat. Bill needed a stomach pump and a coke to kill the fat. 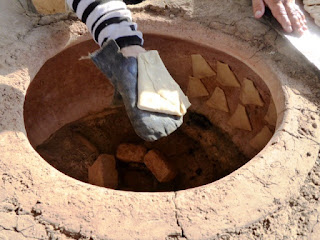 On the way out to Gunup on the edge of the desert, after an early start to beat the heat, we stopped for bread and were lucky enough to find the ladies were making samsas. We got a demonstration on filling them with mutton, onion and mixed herbs, folding and putting them in the oven. Then of course we had to wait ‘til they were cooked and try them. We bought 10 straight from the oven to take with us plus a loaf of bread with mutton in it which surfaced from beneath a huge pile of clean, well worn blankets keeping the loaves warm. 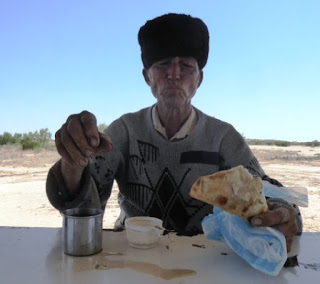 We took the samsas with us to Gunup and shared them with the caretaker who had not eaten for a week. We thought they were good and delicious but he thought they were from heaven and the way they were wolfed down left me for dead and that’s worth noting. (He’s dressed in an overcoat and fur hat and it’s 40 degrees in the sun, but it’s probably not as hot as it gets and he can take them off and feel cool when it does get hot).