The horses of Turkmenistan, Michael Noyce

A day or so into Turkmenistan our guide Jabbar told us that horse racing is the national sport, even without betting allowed. From what we have since learnt from him, this is quite understandable. 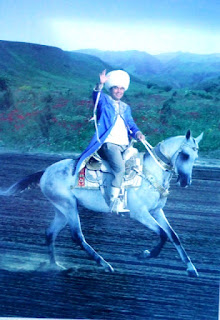 The horses for which Turkmenistan is famous are the Akhalteke horses. They go back to at least the Bronze Age and the Turkmen are legendary horseman. Traditionally, every family owned at least one and basically treated them as a family member. In 1879 the Turkmen defeated Russian Czarist troops in a battle near Ashgabat. The Czarist General escaped back to Moscow and reported that it was the Turkmen horseman that gave the Turkmen the edge.

The following year Czarist soldiers returned and in revenge for their defeat the previous year slaughtered 20,000 Turkmen on the site where they were defeated earlier. The Russians thereafter controlled the country and we were told that no Turkman was permitted to own a horse. The Czarist Russians killed many thousands which only further upset the locals. Apparently after that, both the Czarist and the subsequent Communist governments maintained about 1000 of the horses in a government stud farm, so the breed was continued. The Turkmen were proud of their horse heritage and in 1935 they were able to obtain about 30 of the Akhalteke horses and ride them from Ashgabat to Moscow in a journey of about 4,300km in 84 days. 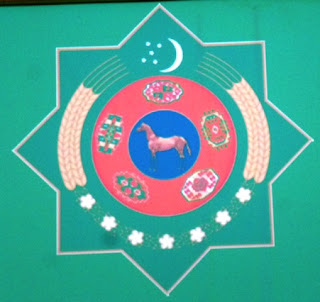 This brought the Akhalteke horses to the attention of the Russian leadership and in 1945 Marshal Zhukov who led the Russians in the capture of Berlin (and the Battle of Stalingrad), rode a black Akhalteke stallion in the victory parade in Red Square. In 1956 President Nikita Khrushchev presented a golden one to Queen Elizabeth.

The Turkmenistan national emblem includes an image of an Akhalteke horse. The last Sunday in April each year is National Horse Day in recognition of the breed. Paintings and pictures of Akhalteke horses are in many places including most of the hotels where we have stayed. The only photos and paintings on the 2 floors in our hotel in Serdar were of these horses including a very lifelike painting of the current President wearing a large white fur cap riding one.

So what do mosques have to do with horse? Heaps, because the first mosque built after independence was on the site of the 1880 massacre of the 20,000 Turkmen by the Czarists and this mosque was built in their memory. In the 1880s there were about 440 mosques in Turkmenistan. At the time of independence in 1991 following the communists there were only 5 mosques remaining. 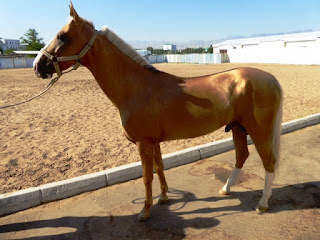 Jabbar took Gerry and I to see the Akhalteke horses at stables in Ashgabat which was part of a large racing and training complex next to a racecourse. We met the head trainer and he told us whilst the horses are not always as fast as European horses they do very well in distance races and particularly well in long endurance races of which there are many in Australia. The guy showed us around the stables and we saw a really beautiful golden stallion which seems to be the 'signature' colour.

You don't need to be a horsey person to appreciate these magnificent Akhalteke horses and their part in Turkman history and the national identity.
Posted by John McCombe at 08:32