The 'Stans and the Great Patriotic War. 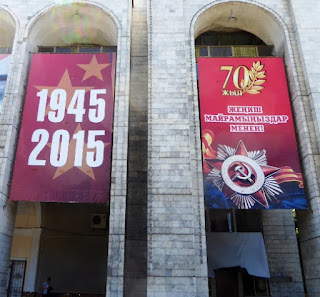 As the Bondi to the Baltic Silk Road journey enters Russia it is interesting to remember the many memorials commemorating the sacrifices made by the ‘Stans and Southern Caucasus in The Great Patriotic War against Germany in WWII. We also saw many banners and signs commemorating the 70 years since the end of the war. Exact death numbers are difficult to ascertain with accuracy but the following will give some indication of the deaths in these countries; Kazakhstan 490,000, Kyrgyzstan 90,000, Uzbekistan 330,000, Turkmenistan 70,000, Tajikistan 50,000, Armenia 150,000, Azerbaijan 210,000 and Georgia 190,000 (Source: Wikipedia). 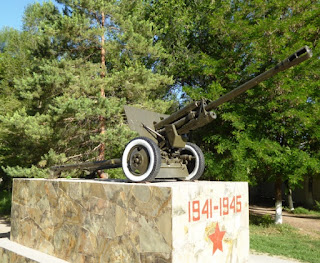 Combatants from these countries were involved right from the start of the German offensive in June 1941 and in all the major battles including the defence of Moscow, the battle for Stalingrad and the capture of Berlin in may 1945. Hero of the Soviet Union was the highest award for bravery and 497 were awarded to combatants from Kazakhstan, 73 to people from Kyrgyzstan and many to those from the other countries. It was not only with combatants that the ‘Stans contributed. Industries and factories were relocated from war zones in the east to the safer areas in the ‘Stans and many people were exiled to the ‘Stans, such as Tatars from Crimea and Chechens, as Moscow saw these people as potentially subversive to the interests of Russia. 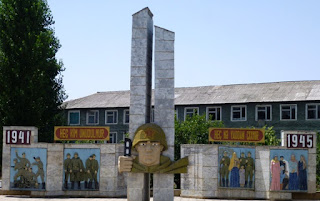 On my first day in Almaty, Kazakhstan, I was amazed to see in picturesque Panfilov Park the massive sculptured monument about 15 metres high of oversized soldiers and the eternal flame. This commemorates 28 soldiers who died in the defence of Moscow. During our trip we saw many monuments including a beautiful memorial next to Independence Square in Tashkent, a huge one in Ashgabat and many smaller ones in local communities. The photos will give some idea of these memorials which very much reminded me of the many memorials across Australia.