On my last day in Tbilisi before flying back to Sydney I was reflecting on some of the fascinating 'cameos' from my amazing adventures through the Stans. 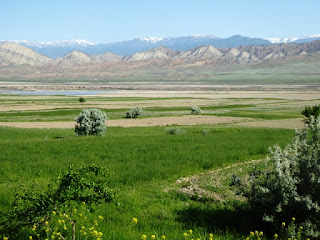 I remembered day 2 of exploring the historic Fergana Valley in Uzbekistan when we were having breakfast in our modest hotel in Kokand. In the days of the Silk Road this city was at the crossroads of the ancient trading routes.

So it was interesting to meet at breakfast a modern day Silk Road trader. The man was a Uighur from Kashgar in China and was in Kokand on a trade mission. Our guide then gave us a short history lesson about the Uighurs and their trade routes and how their caravans would have travelled through just where he was now having breakfast.

Our new Uighur friend was following in the footsteps of his ancestors and in a modern sense, continuing their ancient traditions of commerce and trade. As much as things change, many stay the same.

Later, on the road to Tashkent we drove through a village called Qashqar, or Kashkar, as our map also showed. But isn't Kashgar in China? Our guide explained that in the days of the Silk Road many traders simply settled and named their area after their hometown.

Just like home, with Paddingtons, Richmonds and Brightons. Glad to see these true Aussie values so far away.