A wine tasting in a wheat field. Michael Noyce

Ian is always on the lookout for a wine tasting and the rest of us very reluctantly go along with him. A few hours out of Baku Ian saw a large grape sign and radioed that he thought we should try and have a tasting. And we did, but it turned out not be a branch of the Pernod Ricard or the Southcorp groups.

We turned down a back road and via sign language asked a guy about a tasting. The next thing the guy gets into the Whippet and away we go, winding our way up and around beautiful little hills with really nice looking vineyards on one side, apple growing on the other and extensive wheat fields in the distance.

We drove through a very ancient looking village and the guy in the Whippet kept ringing on his mobile; presumably we hoped, to find a wine tasting for us. Where was the guy taking us? 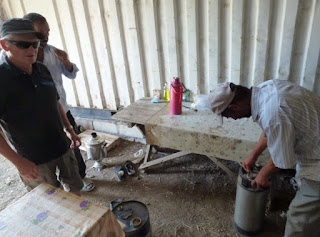 And we soon found out. The old cars stopped outside a shed next to a very big vineyard on rolling hills with wheat fields in front. The guy led us into the shed where a few men were sitting around having tea. It seemed that this was something to do with grapes and wine as there was some machinery in the shed and along one side were 2 rows of small stainless steel cylinders, about 600mm high. Not big, but big enough for some bootleg wine it seemed. The photo shows the decanting room. 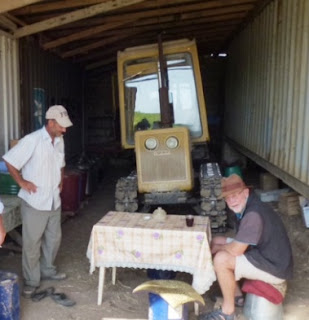 A guy wearing an FBI cap opened a cylinder and poured some red fluid masquerading as wine into a small glass. Ian sat down and being the diplomat tasted it and says ‘Da, Da' and the FBI guy smiled showing his very big gold teeth. The wine was absolutely undrinkable and like a true taster I spat mine onto the earthen floor while giving the guy the thumbs up. All that did was encourage another man to take some wine out of his cylinder and give Ian and I another taste. This was marginally better and almost drinkable and our few smiles only gave the guy more hope!

But how do we escape without having to buy the vineyard? 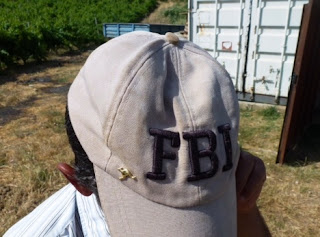 By this time there are about 10 other men all milling around; no doubt looking at the cars but also wondering what these four mugs will do next. Ian yells out to Gerry who had retreated to the safety of the Toyota with windows up and locked doors "Gerry, bring a few kangaroos pins for these blokes". And he does and we pin 2 on some guys and smiles all round; except for the guy with the almost drinkable wine. He started to flick his fingers as if to say "What's in it for me". So, I emptied out a 500mm plastic water bottle and gave it to him which he fills up with his wine. He still flicked his fingers so I gave him another ‘roo pin.

I don't think he was happy but a fair exchange nevertheless; a kangaroo pin for some undrinkable wine but at least we got away, slowly meandering along very rough tracks in the wheat fields to the main road.