Wine tasting with the Monks 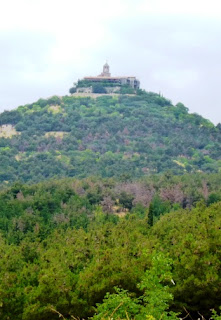 From previous blogs readers will be aware that Ian has quite an eye and nose for a wine tasting. Driving from Tbilisi to Armenia was no exception. We were making good progress and Ian, who was navigating, suddenly spied a sign saying 'WINEROUTE' and you guessed it, we turned off and followed the sign. For a while we had seen what we thought was a a monastery on a very high hill and this is where we ended up.

The monastery is called the Shavnabada Monastery and we were told it dates back to the 7th century. It is connected to the Georgian Orthodox Church. We had a fascinating hour looking over the place but mainly tasting wines and taking to a monk whose name was Father Gregorio. He told us there were 18 monks living there, he was 56yo and had been there 17 years. 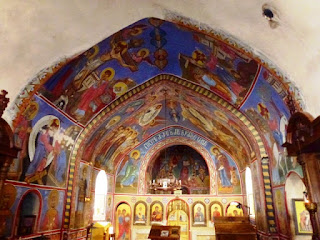 One of the young men took me to the chapel which was decorated with very colourful religious paintings with lots of icons and candles. The whole time I could hear monks continually chanting in an adjacent room.

The cellar and tasting room was on the ground floor of a very tall stone building, probably 4-5 stories high. Father Greg took us through their quite ancient wine making process and we tried 6 wines. 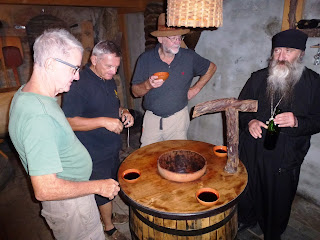 By “try” I should say drink, as he would fill up an earthen bowl for us. Far too much, but it had the intended effect; we bought 4 bottles at about A$25 each and had two for dinner in the evening. 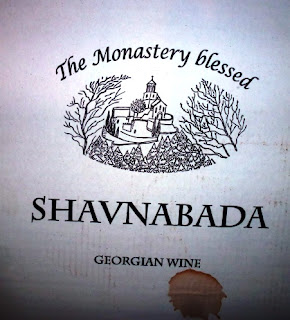 Quite good but Noyce Wine from Wollombi is better! Perhaps I am biased.