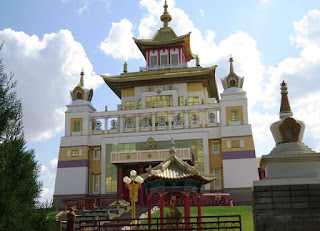 Then we came to a surprise, and thought we had missed a turn and were back in Central Asia. Imagine driving into Nyngan and finding it had been re-populated with Buddhists from Central Asia and Mongolia. This is the small city of Elista, 300 km south of Volgograd, in the Republic of Kalmykia, part of the Russian Federation and looking quite out of place. Our Lonely Planet – Russia tells the story but it doesn’t quite prepare us for almost total Asian faces. 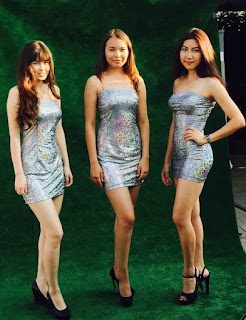 As well as being a distinct anomaly in its Mongolian and Buddhist roots, Elista has a further surreal element. Chess City was built on the edge of the city for the 1998 Chess Olympics as an outcome of the predilections of a former Kalmyk president. It consists of the glass Chess Palace and many terrace houses, similar to the Vines golfing complex outside Perth. The complex is an alien and now empty extravagance, but provided us with shelter when we were turned away from the quirky Bike Post guesthouse because it was full. Three pretty local ladies posing for a marketing campaign added to the unreal atmosphere.

Basan is a young Kalmyk in Elista, a geologist, specialising in hydrology – right up Ian’s alley. He joins us for the evening, disappointed that we decide to stay in our ‘apartment’ and cook for ourselves (he may not have been the only one) and not enjoy Kalmyk cuisine. He compensates by bringing in some take-away and excellent vodka. An interesting evening, talking politics and international relations, as we present our western corporate media view of the situation in Ukraine. He takes no offence (perhaps pitying us a little), remaining polite, good humoured and genuinely curious about Australia. We swap details and he will see us in Aus sometime soon. He has already done Africa and Kilimanjaro.

Before we leave next morning he proudly shows us around the Gold Temple of the Buddha Shakyamuni, including witnessing a service complete with chanting monks. Mike buys a CD and contemplates his mantra on the road to Volgograd.
Posted by John McCombe at 18:35