It seems like after travelling half way round the world in a little dog of a car there may be some words of mechanical wisdom afoot. Alas not from me, but a little knowledge has been gained. 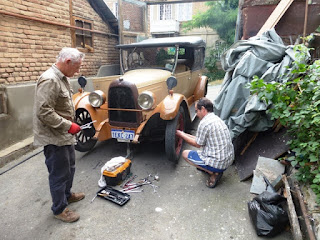 Firstly the difference between preparation for a long passage and restoration for personal satisfaction should be considered. Ian and The Big Dodge, like our friend the Professor from Tbilisi, who disassembled every part, straightened, cleaned, replaced and reassembled to make a perfect car, probably better than rolled off the production line so many years ago. The immense satisfaction of having these engines spring to life on the first piston to the top, purr and then the exhaust growl on full throttle up hill is pretty hard to describe and quiet obvious, somewhat different from my reservations on the approach of a hill and the knowing necessity for full throttle; a little knock from a big end (don’t let it lug on too low a rev) and an eye on the temperature gauge ready to reduce throttle and double shuffle the three speed into second or first to take the next hairpin bend. Never fear, all is good, there hasn’t been a hill that has stopped the little car although plenty of fuel has gone up the brass Koala carburettor into the tiny 134 cu in side valve. These hills actually include some of the main mountain ranges of the world. Between Thailand, Laos, Chinese Tibetan plateau (bloody cold), Toragut Pass, the mountains of Kyrgystan and now over the Caucasus Mountains into Russia – Kosciusko being half the size and half as steep. We are then going to have a go at the Urals.

Now the daily satisfaction for me, that I have built the engine right, or replaced second gear that grumbles worse that a constipated boss or replaced the rear uni joint that squeaks when it needs an oiling. All the things that I would have loved to have done if I was building a … Bentley. 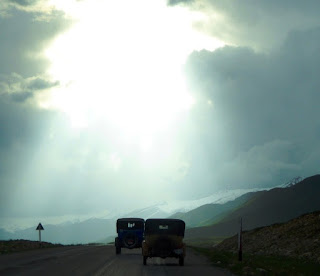 The relief when we hit the summit; select angels and ride the four wheel brakes down the other side, slipping it into top to boost the speed to overtake an unsuspecting truck or Dodge. My satisfaction will come when we roll into the final destination without major repair or replacement. The little car giving its all, 20 thou over, tapered bore by around 5 thou on leaving Perth, goodness knows what now, more blow by than you know what and not too many horses certainly not the 20 that she started with. But the engine pulls evenly and consistently and holds temperature even at 40 ambient compression on last count was 4 atms on full crank speed using 12v into the 6 volt self starter and throttle open, cold. Pretty marginal by my and the masters opinion (see photo). Too much wear now for me to put in the new set of rings supplied by George, we are going to tough it out, I hope, a bit slower. 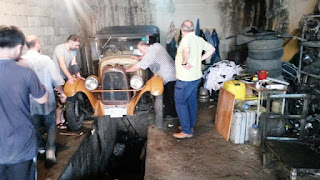 Routine maintenance has involved spokes, wheel bearings, plenty of grease and occasional ignition timing and mixture, although I have abandoned the manual advance and tightened distributor down so it cannot move, tightened main mixture screw flange and set it a bit rich. Oil is generally the heaviest we can get and now added a super slick additive. We even washed it. Tires hard on the back and soft on the front as we hit some pretty deep holes.

Editors note: Bill can do intensive mechanics and Jack Kerouac stream-of-consciousness all in one.