A journey across the Caspian Sea, Michael Noyce

We arrived at Turkmenbashi in the late afternoon not knowing when we might be able to catch a ferry across the Caspian Sea to Baku in Azerbaijan. There is no timetable or schedule of any kind and all the blogs, guide books and websites simply suggest that you turn up and wait until a ferry is full and ready to sail. Also, it's pot luck what kind of ship you might be on; a rail freight ship with some basic cabins for a few passengers to the newer Turkman with much better facilities and even showers.

As we drove into Turkmenbashi we could see an old rail freight ferry in dock. We checked it out but no-one could tell us when it would sail. A few passengers were spread our in the waiting room, but we certainly weren't going to do the same. After a 12 hour drive through the desert and in the heat we needed a nice hotel, hot showers and wi fi, even if we missed a ferry that night. 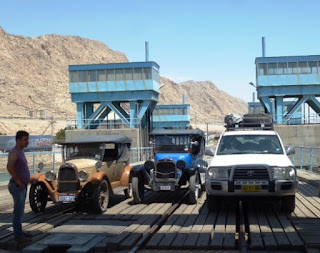 Next day we checked out what ferries were in port and the old blue one from the previous night was still there but sailing soon. We had a very short time to pack, process customs etc and be on board; a big rush it was, but we made it. We anticipated the usual paperwork and bureaucracy and weren't disappointed but overall it went pretty well. Only one slight hiccup. Half way through processing my passport there was a blackout and the guy told me sometimes it lasts a day. Oh no, so close but so far, but all was well and the power came on after about 30 minutes. 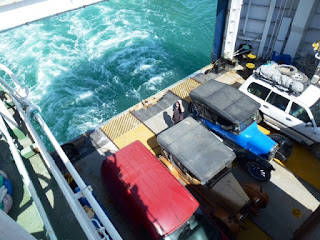 A German guy and his son with a Fiat transit van were also with us so that made 4 vehicles. Coming aboard was interesting. As we were passengers, the young German and I boarded while the four cars and drivers were still being processed. We walked along railway tracks up to the back of the ship. A very big iron door was open and we could see right into the ship; 3 rail lines and railway carriages with just enough space we thought at the back for 4 vehicles. There were 2 men standing there as we walked along the railway tracks; both with about 3 days of black facial hair, one with a shaven head, white tight fitting T shirt and wearing slim camouflage coloured long pants. The other guy wore a T shirt and black trackies. We thought we had met a couple of pirates and the first thing the camo man asked for was US$90 for a bed. I was about to pay but remembered what Ian had told us; don't display US$ and to say we only have Visa and we will then be able to negotiate a better price for the cabin. Oh really? 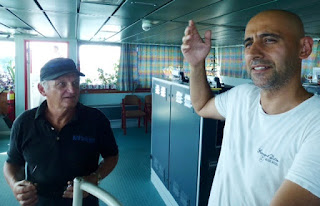 It was not to be and before long the cars drove along the railway tracks and were aboard. Ian pretty soon realized that the camo man called the shots and we all paid the money and were settling into our cabin. It turned out the camo guy was the ship's captain and the black trackies guy was the first officer. The captain was a pretty nice guy and invited us onto the bridge which was of much interest to Bill with his fascination with all things mechanical.

The ship was Shahdag and built in 2005. It is 154m long and weights about 8,500 tonnes. It is a cargo ship that carries rail carriages on 3 parallel tracks on the bottom deck. The carriages seemed to be full of bags of construction materials such as sand and gravel. Our four vehicles were parked right at the back and there was basically no room for anything else. The ship had a few spare cabins for passengers.

Let me describe our cabin; 3 double bunks, 2 portholes and one that opens, a wardrobe with broken and dusty shelves, small wooden table and 1 chair. We were sharing with the German guy and his son. Simply put, it's probably what a 6 man gaol cell is like. Opposite is a toilet but no paper and there does not seem to be a shower. All for US$90 a person including dinner tonight and we assume some sort of breakfast tomorrow. Bill was relieved when he saw a life jacket sign on one of the wardrobe doors. He opened it and then exclaimed "Shit, where are they". He is still looking

The only lounge on board comprised 2 small lounge type chairs, a ping pong table without net, bats or balls, a rough looking wooden coffee table and a 5 seater half circle 'lounge'. On one wall is a crackly flat screen TV. At the opposite end is a big colored portrait of the President of Azerbaijan. 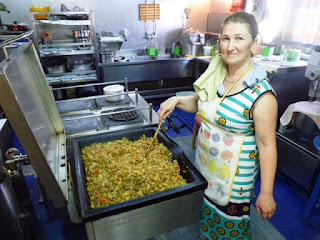 Dinner was at 8-30pm and the six of us sat in the crew's dinning room next to the galley. There were 2 women on board who seem to be be jack of all trades and with one more focused on the kitchen. The other made our beds, gave me afternoon tea, set up the tables, served us and it would seem anything else required such as washing and cleaning. Both are nice and friendly. We had Russian borsch soup and then some kind of vegetable dish with a chicken.

We had earlier chosen our bunks and were pretty well asleep by about 11-15pm. Ian decided to sleep in his swag which he rolled out next to the railway carriages on the bottom deck. At some stage during the night he lost his sense of adventure and moved onto the remaining top bunk.

Surprisingly, we all sleep pretty well and the air con in our 'cabin' actually worked. Breakfast was stale bread, cheese, metala, jam and luke warm black tea. We survived ok and to fill in time we chattered amongst ourselves and also looked across the Caspian at other ships and the many oil drilling platforms. And we even had lunch; lentil soup and chicken and macaroni.

The Captain told us we would not land at Baku as expected but at Alat a new port about 75km south of Baku. Soon we could see land and waited as the ship edged closer and ever closer to the pier. It was very interesting seeing how this quite big ship was able to maneuver backwards with it's rear door wide open, right up to and then connect with the rail lines on the terminal.

We had successfully crossed the Caspian Sea from Central Asia to Europe. The journey was really just part of our continuing adventure, had been without incident and was actually a fascinating experience, a lot of fun and the ship's crew looked after us quite well. We did not quite know what now to expect and thought from all the confusing blogs and websites that we would need to pay something for the cars entering Azerbaijan.

Little did we know what would await us over the next 7 hours, but that is another story of fact not fiction, although it might seem like one tall tale from a writer of TV fiction.