Our short tour of Armenia ended up a little shorter than planned due to being lost on the way to the border. We overnighted at Gyumri a very old and historic town that was badly damaged in an earthquake in 1988 that killed over 50,000 people. Due to our late arrival we were not able to see some of the many sites in the area. 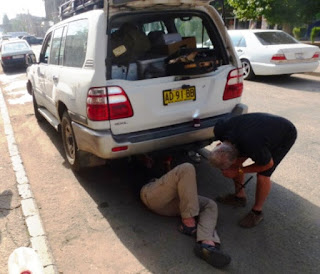 The next day we had a tour and cognac tasting at the Yerevan Brandy Company which makes the world famous Ararat cognac. Just as we were leaving our hotel at Gyumri for the 120km drive to Yerevan we heard a clap clap clap sound. Yes, a puncture in the main street of Gyumri, in peak hour traffic and just before the main intersection. Anyway, we changed tyres and made it in time to the tasting at Yerevan. A very interesting tour and tasting and naturally we all have lots of cognac. 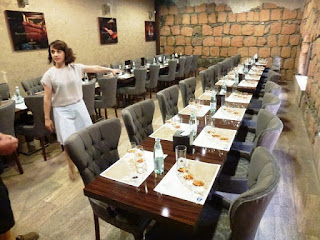 After the cognac tasting we needed to drive through the central part of Yerevan, the Capital of Armenia. It looked a nice city with lots of trees and wide avenues. John McCombe, who flew in a few days earlier and who we picked up at the cognac tasting, had time to see some of the main sites. He said the main Museum was excellent with a very good section on the Armenian genocide that Turkey perpetrated when they expelled ethnic Armenians from Ottoman (Turkish) lands in 1915. Over 1.5m Armenians died and it is still a very big issue here and is the reason you cannot go between Turkey and Armenia.

Our stop that night was the lovely town of Dilijan in the Armenian Mountains. We had a nice drive through the Armenian countryside and also briefly stopped at Lake Sevan which is a fresh water lake at a height of 1900 metres with a number resorts. It's a very popular place for Armenians wishing to escape the oppressive summer heat. 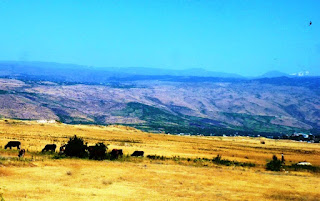 The next day we planned to be back in Tbilisi by lunchtime. But once again our reliance on the GPS led us astray but this time we only lost about 2 hours. Nevertheless, another interesting journey with the Toyota's supplementary tank flashing empty for at least 15 minutes until we were able to fill up. Our unintended 'side trip' took us very close to the Armenian border with Azerbaijan and we drove through much of the disputed territory. A very pretty area with lots of rolling hills and little villages and it's a real shame there is still unrest in the area.

And so ended a brief but enjoyable trip through Armenia.