How to be lost travelling between Georgia and Armenia 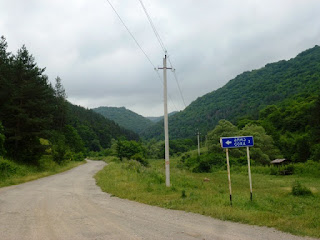 We had left the 2 classic cars at our hotel in Tbilisi and headed for Gyumri in Armenia in the Toyota, me driving and Ian navigating using the GPS on his i-pad. We estimated a 4pm arrival. We drove through quite a few villages and were not really concerned that there seemed to be less and less traffic on the ever deteriorating road. We put the rough roads down to a lot a mining activity in the adjoining hills.

The drive was actually very pretty with towering green hills, then very thick bush, very pretty wild flowers, meandering narrow valleys with beautiful mountain streams and quite interesting old villages, many of which seemed to be almost abandoned. It was really as if we were in a time warp and driving through a museum. 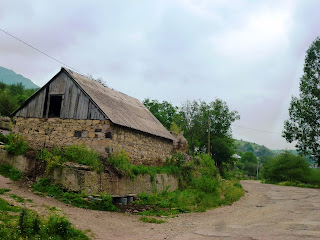 The GPS-directed road became narrower and rougher, as rough as anything I have ever driven on, down to use of only first gear, to feel every bump, or second gear to feel only every second hole. The other gears got a holiday. Nevertheless, the GPS kept identifying this village and that village along the mountains high above. Eventually, when we had gone for over half an hour without seeing another vehicle, Ian reluctantly concluded that this was NOT the main way to Armenia. We even wondered whether there would even be a border crossing point at the end of it. 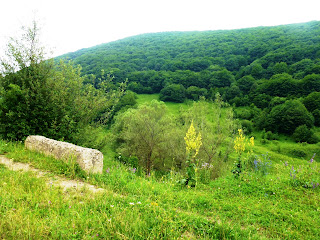 At some stage this had clearly been a main road. The broken bitumen was quite thick in parts and large rectangular stones about 1 metre long had been place on many bends and culverts. The valley started to open up a bit and as we drove through a very old soviet, or earlier, village we could see the border post ahead. We were as surprised to see them as they us and smiles all round. Not many 'customers' for them it would seem. It only took a few minutes to exit the very rough shipping container that was Georgia immigration, and then we were with the Armenians. It took about an hour to clear the Toyota’s paperwork and we were given the green light. The border barrier into Armenia was not a big boom gate, heavy barrier, razor wire or the like; simply a thick string line which a man lowered and we drove into Armenia. 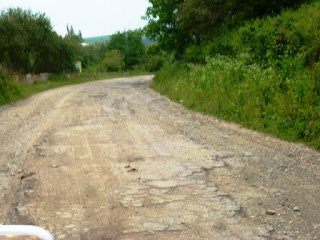 The problem was that the GPS took us on the shortest route in kms rather than the main road. The Armenian policeman told us that other tourists had been similarly caught out.

We arrived at our hotel in Gyumri at 8pm, at least 4 hours later than we had expected.