We are heading north towards Perm, having abandoned the heavy truck race that is the M5, the east-bound, pot-holed, rutted-bitumen truck route from Samara to Ufa and on to Chelyabinsk (we want to cross the Urals and set foot in Siberia, at Ekaterinburg). Essen AG is the first big establishment on the way into Naberezhnye Chelny. You may not have considered Naberezhnye Chelny when you last contemplated a tour of Russia, but the international manufacturing world is very interested.

They make trucks here. The Kamaz plant is the biggest vehicle plant in the world. It’s in the Republic of Tatarstan, and that’s the name of our hotel, officially 3 stars but to us, at least 5, especially after the previous nights camp. It has a cool restaurant (with floor show), obviously very popular with business visitors and well-heeled locals, and various languages can be heard at breakfast, including from both sides of the Atlantic. 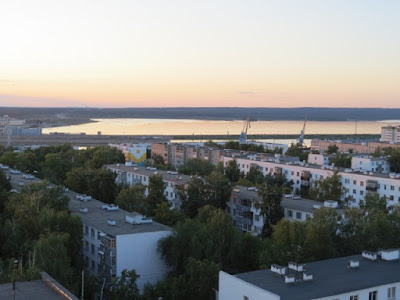 It’s on the Kama River, a tributary from the north east, to the Volga, east of Kazan (currently hosting the FINA World Swimming Champs). The photo shows the northern sunset over the river.

The Tatarstan Hotel did us proud. Apart from the 10% discount, the 2 hour sauna and massage for Ian and Mike (including the birch branch beating), and excellent complementary lunch packs for each of us as we left, they alerted the press! And that’s the next story.
Posted by John McCombe at 09:40