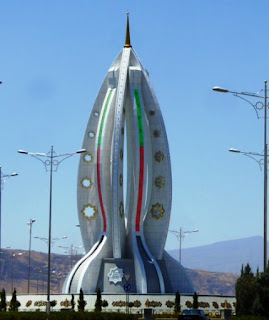 Ashgabat is the capital of Turkmenistan and was virtually destroyed in 1948 in an earthquake that killed 90% of its people. It has to be seen to be believed. The modern Ashgabat has been built since independence in 1991 and is a cross between Las Vegas, Dubai and Disneyland. There are wide open six lane streets, massive monuments to the last President and the present one, huge buildings but no real high rise. All the building are basically white marble from Carrara, Italy, and this has kept the Italian economy afloat for years. We did a tour around Ashgabat before we went to the hotel and it was quite amazing, but with no people on the streets, understandable due to the 50c heat. 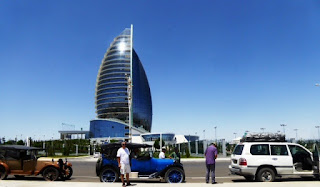 Although it's hard to describe individual buildings many have something symbolical on the top. For example, a beautiful building of a bank has a huge gold coin glistening on the top and I think it is the Ministry of Gas which has a symbolical gas flame on the top. The Arch of Neutrality is at the end of a long, wide boulevard. The whole thing is 40m or more high and on the top is a 12m gold statute of the former President that used to rotate once every 24 hours.

Many people have suggested to us, as do some guide books, that the new Ashgabat is totally over the top and lacks taste. I actually think it's magnificent but the final test is what the locals think. After all it's not up to us to judge. The locals love and are very proud of Ashgabat. Let the case rest.

And let our readers make up their own minds from the photos with this blog.