The wines of Samarkand, by Michael Noyce 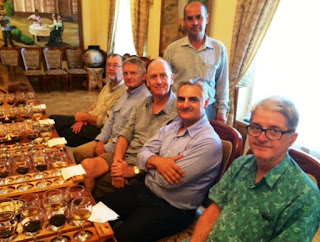 Who would think that grapes have been grown in the mystical city of Samarkand since before the time when Alexander the Great captured the city in 326BC? We enjoyed a delightful hour or so tasting wines in the oldest winery in Samarkand, and they were all pretty good and very drinkable.

The winery dates back to 1868 when Russian Tzarist soldiers captured the city and installed a Russian winemaker. The business is owned by the State and has 35,000 hectares under vine; a hellava lot! Half the grapes are used for the wine with the other half becoming raisins. Most of the wine is exported to Russia. We tasted 12 different wines: reds, one white, fortifieds, almost Muscat or port, two cognacs and something I can't really describe but the others seemed to like it.

The tasting was very well organised. Tasting glasses were already set up when we arrived (photo). The explanation was in Russian which our guide translated. Each glass had about 150ml in it and if we drank all the wine, instead of tasting, we would have been certainly over the limit. Someone asked if anyone ever drinks all the tasting wine and the man replied "Only the Russians"!

A nice finish to another fascinating day.