A visit to any country generally requires a visa and entry through a border. Many visas are simple formalities and entering a country quite easy. The opposite is our experience here. Obtaining our visa necessitated a number of visits to the Uzbekistan Consul in Almaty, Kazakistan, and with quite a bureaucratic process to follow. Entering the country from Kyrgyzstan was a 5 1/2 hour experience of bureaucracy, patience and photos opportunities of the old cars for the customs people and police. All the people were nice and polite, but nothing was simple 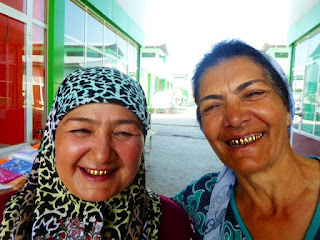 The people of Uzbekistan are wonderful, very friendly, helpful and always welcoming. We had many delightful experiences of the people offering accommodation in their homes, sharing food and drink and generally being warm and hospitable. Despite the warnings by DFAT we always felt safe and secure. We spent 3 days travelling around the beautiful Fergana Valley which has been the scene of considerable unrest in prior years. Security was tight with many checkpoints with armed police, but these were fewer and fewer the more we travelled throughout the country. In fact the police are not even armed in many cities. We were told in Samarkand by two different sources that it's completely safe to leave your car open on the streets and that car theft is virtually unknown.

We all like to keep in contact with home and this was sometimes not easy with wifi very, very slow in many places. But the good news is that there was free wifi wherever we stayed, though often with insufficient bandwidth to download newspapers or conduct a Skype conversation. Nevertheless, we could always email, even if a little slow. 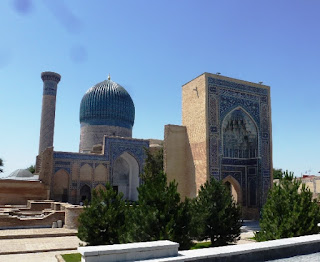 The history of Uzbekistan and it's part in the Silk Road story is terrific. It's a very ancient country and this can be appreciated in the history museum in Tashkent and from visiting the wonderful Silk Road Cities such as Samarkand, Bukhara, Khiva and many others. Even the small ceramics town of Ristran in the Fergana Valley is ancient and we met a family whose ancestors have been in the ceramics game on the same site for over 1000 years; great succession planning. Alexander the Great, Genghis Khan and Tamerlane conquered the country. In Tamerlane’s Mausoleum (photo) in Samarkand, the Gur-e-Amir (Tomb of the King), we saw a map showing the extent of his conquests in the late 14th century; from Delhi in India, all of Turkey, most of Central Asia and west into Syria, Lebanon and Egypt. Pretty amazing and unknown to me. And we should not forget the Tsarist Russians from the 1860s and then the Bolsheviks from the 1920s.

Nukus, a town about 100 kms north of Khiva, is the gateway to the Aral Sea and has the outstanding Savitsky Museum of Soviet Art. Ian, Gerry and Bill toured the museum and thought it was wonderful with over 90,000 works of art, mostly avant-garde, but only a small proportion at any one time on display.

One of the great blights on Uzbekistan is the draining of the Aral Sea during Soviet times for cotton irrigation, and the decimation of many communities that depended on the Aral Sea for their livelihood. Whilst we did not go as far as the Aral Sea we saw huge areas growing cotton, all flood irrigated by water from rivers draining into the Aral Sea. A real negative on the one hand, but cotton is important for the economy on the other hand.

It's pretty easy driving around the country and the roads are generally quite good, except for much of the road from between Bukhara and Khiva. There is a great 4 lane concrete highway being built and about 150kms is finished. But much of the rest is pretty bad, with driving difficult in parts as it seems little or no maintenance is being done, pending the construction of the new concrete road. But whilst car travel is nice, it's another experience to travel on the excellent train system as John and I did between Samarkand and Bukhara.

We loved the food, with Uzbek salads of tomato and cucumber, and shaslicks of lamb, beef, chicken and vegetables—all very nice. We had the lovely rice based national dish, Plov (Russian), or Palow (Usbek) a number of times and enjoyed seeing how it is slow cooked in large pots.

We have generally experienced a hot dry climate with temperatures up to 45c in Khiva and then the next day a very comfortable low twenties as a storm came from the desert; but no rain anywhere. As expected, the further north and west we travelled the hotter it became, and we can expect even hotter weather in Turkmenistan

Politics. Islam Karimov has been President since Independence in 1991. Whilst he may be sometimes criticised by the west, the people seem to like him, and particularly, because he has made the country safe, or so people tell us. We met a pretty good cross section of people and I heard no criticism of Russia, except from some Russian hitchhikers. On the train to Samarkand, John George and I conducted a straw poll of 4 Uzbeks in our 6 person compartment; thumbs up for Karimov, Putin, Gorbachev, President Kennedy and the Clintons. Thumbs down for Stalin, the Bushes, and a big boo for Obama. Not scientific but interesting.

One final point; despite my own assumptions, most if not all we spoke to remembered Soviet times with some degree of fondness; everyone had a job, education and medical treatment were free.

All in all, a lovely, fascinating, friendly and safe country, and I do hope to return in the not too distant future.