Living history - from the Bolsheviks to the iPhone. Michael Noyce

I am writing this blog from the city of Mary in Turkmenistan where a really lovely Turkman was born in 1919, ninety six years ago and the year the Bolsheviks took over the area. This man has experienced all the historic events in Central Asia over the last 100 years and his story is, to me, simply remarkable, as is this wonderful old guy. 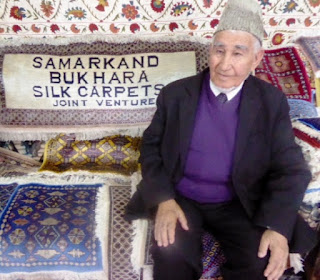 His ancestors were Turkmen and always lived in the Mary area. For over 200 years the family built up a very successful carpet making business and when the Bolsheviks arrived were very wealthy. The Bolsheviks introduced collective farming and demanded that the family's successful business become State owned. The 96 year old's father, as head of the family, resisted but the pressure continued from the Bolsheviks and the persecutions increased. In 1931 the father decided to leave Mary and escape to Afghanistan which was a free country.

They arrived in Afghanistan with virtually nothing, except their skill and hard work ethic and over the next 40 plus years again built a very successful carpet making business, with, by this stage, the 96yo as head of the family. He had only 1 wife and together they produced 11 children of which 9 are alive today with a 30 year age spread. Much of the labour making the carpets were Afghan orphans in Kabul which the old man employed to take them off the streets and give them a home and life skill.

In the early '70s the old man went to the US to a university in Pennsylvania and lectured for a few years on textiles and dyes and associated topics.

And then came the Russians when they invaded Afghanistan. The old man and his family tried to stay away from politics and when he wanted labour he would arrange with the Russians for more orphans. He said it was hard with the Russians there but they got through these times relatively OK. Most of his kids went to university in Kabul and are now spread between the Stans, Canada and the US and are very successful as doctors, scientists and in other professions.

After a few years the Russians retreated and Afghanistan became more 'normal' again.

The third tumultuous event for the old man was the breaking up of the Soviet Union and the independence for the various countries in the ‘’Stans. The old man chose Uzbekistan and in 1991 moved to Samarkand and set up the family carpet making business. Over the next few years most of the family came to Samarkand and today the family's carpet making business is the biggest in Uzbekistan while still maintaining the Afghanistan side.

They employ over 1200 people around Samarkand and their approach to people management is almost worlds best practice; quite remarkable given where they are and where they have all come from over the last 100 years. One example is that women are given long term paid maternity leave and if they want to stay home and look after the kids, looms are set up at home. The old man's 23 year old grandson gave us a tour of the main factory and warehouse and over the next few days we became quite friendly with the family. This culminated in the old man's son coming to Bukhara when we were there and hosting us on our last night at a magnificent private dinner on the eve of Ramadan which started the following day.

At exactly 9.19pm we heard a kind of wailing sound coming from the old man's pocket. He smiles, puts his hand in his pocket and out comes his iPhone. He has a Ramadan app and it's the call to prayer. And he is still wearing his Hugo Boss jumper under his designer suit, which he always wears.

So, here is absolutely living history; a man born into free Turkistan, overwhelmed by the Bolsheviks, then experiences the Russian invasion of Afghanistan, embraces the breakup of the USSR and the independence of the Stans and now is part of the iPhone world and modern Western fashion.

He was an engaging and delightful man with reasonable English and always wore a special Afghan cap. ‘It was made from the wool from around the neck of a just born and slaughtered lamb and I think is called qorakol wool. We felt somewhat humble in his presence and almost overwhelmed being with a man who has lived through the incredible history of the Stans over the last 100 years and is still embracing the emerging new world of today.

And finally, the story of a wealthy family resisting the Bolsheviks and then escaping to Afghanistan is not unique. ‘The story of our guide in Turkmenistan was similar. They were wealthy Turkmen and his great grandfather resisted giving all his livestock to a collective farm. He was taken by the Russians and never seem again. The family escaped to Afghanistan. 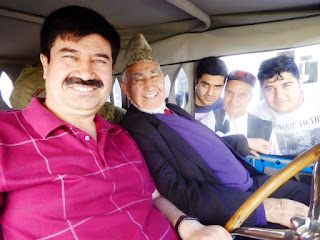 3 generations in the Dodge with. His 46yo son, a doctor and now managing the business, 2 of this US educated grandsons and his 69yo brother (between the grandsons) who managed quality control.
Posted by John McCombe at 04:47