The mounds of Turkmenistan, by Michael Noyce 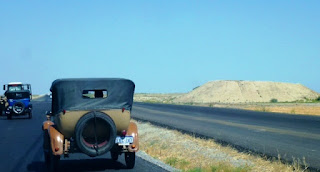 Driving through Turkmenistan we would see from time to time large earth mounds of varying sizes. They could be 20m high, 100m long and quite wide and even bigger. These mounds are progressively but slowly being excavated by archaeologists and are very ancient. On the way back from visiting the Bronze Age archaeological site of Gonur Depe we stopped way off the beaten track and saw a partially excavated mound that revealed a 5th century Christian church. It is believed that many mounds cover 'caravans' which were stopping places for the camel trains on the Silk Road, as camels could only go about 25km a day.

Just outside Ashgabat we made a slight detour to see the remains of an old mosque that was destroyed in the 1948 earthquake that destroyed all old Ashgabat and killed 90% of its people. From there we could see two large mounds; one from the Stone Age and one from the Bronze Age. Excavations of the Stone Age mound in 1904 by a US archaeologist revealed wheat that was at least 8000 years old; the oldest wheat yet discovered we were told.

And that is only one of the remarkable things about Turkmenistan. There is so much history here and still even more waiting to be uncovered; a truly fascinating country.