We’re 58 degrees north, just west of the Urals, and it’s still hot in the middle of the day. At night we aren’t complaining that the hotel hasn’t bothered with air/con. It’s comfortable with the windows open.

Perm is home to one of the best Ballet and Opera companies in Russia, but, being mid-summer, they’re closed. They’re on tour somewhere (else) in Europe. So it’s back to the rocks.

The Permian Triassic geological boundary was defined near here by English geologist Murchison in 1841. It is a significant time line as mass extinction occurred at that time. The Paleontology Museum 500 km away in Kirov, which we visited, has a fine display of reptile fossils from exposures in the nearby river bank that they claim better defines the boundary of extinction.

Mind you the mass extinction of the Permian took 90 million years, contrasting with our modern rate which will see us lose 50,000 of the world’s 250,000 plants in the next few decades as we humans drive the sixth mass extinction. 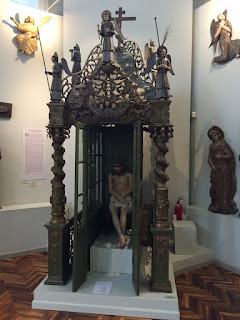 Perm is an industrial city, famous for its copper and with a revolutionary history (according to a mention, possibly fictional, by Tom Keneally in “The People’s Train”), on the Kama River, above Naberezhnye Chelny, and can ship goods right to the Black Sea in the South, via the Volga and Volga-Don Canal. It has a large fine arts museum in the Spaso-Preobrazeheensky Cathedral with old and new Russian paintings and the largest wooden church altar in Russia plus a floor of finely crafted, ancient, wooden, religious sculptures.

PS: Here we were joined by the final member of the expedition group from outpost WA, Nigel McCombe (still digging for a connection) who was glad to talk and think in English after 36 hours traveling alone to join the "travelers" and began to enjoy true Russian friendliness and hospitality in the Urals.
Posted by John McCombe at 18:58