There they were, 4 journalists and one cameraman, representing 4 different media organisations. The hotel had booked us up the night before for an 8.30am press conference. The hotel had also provided a translator with excellent English, as well as a conference room. 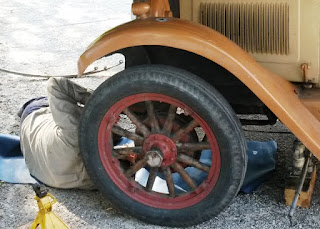 We started by taking them outside to talk about the cars. Bill just happened to be replacing a broken spring leaf, thus helping to illustrate why we had left the M5, preferring the quieter road to Naberezhnye Chelny. 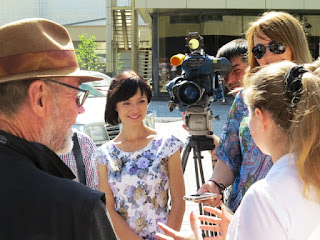 The journalists were very curious, and a little disbelieving about our trip. We could see them thinking "these old guys are nutters", but they politely and persistently probed for detail about the cars, the trip, the breakdowns, the roads, us, our ages, our wives, our reasons, our attitudes to Naberezhnye Chelny, Russia and economic sanctions, and what we knew about Russia. This led onto a discussion about the Cold War (they were much too young for it to have meant much), propaganda (ours), and Russia's actions in South Ossettia and Abkhazia in Georgia, as well as Eastern Ukraine. 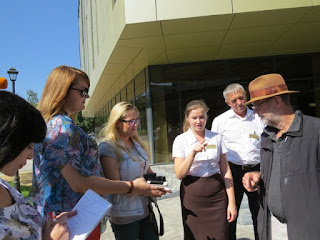 It could have gone on for much longer and, of course, we thought of much more to talk about afterwards. These contacts are what makes this trip more than just a tourist drive through a new country. The cars attract attention and sometimes a nugget like this appears.

The publicity from local contacts like this are also adding to interest in our blog, with more hits and comments from Russian readers.