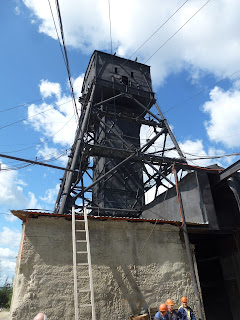 Visitors to Russia often report on the warm, open hospitality of the Russian people. We have already experienced it but today we were in for something that will be hard to top.

Pyotr (Peter) is, or was, a gold miner. He knew a few English phrases, and the most used became: “What would you like to see?”and “Let’s go”. We met him when we wheeled the Toyota into the front yard of an old gold mine head frame and he walked out to meet us, showing curiosity rather than suspicion.

The Mineralogical and the Geological Museums in Yekaterinburg had both been closed but Bill was still keen to see a gold mine. He suggested a vacant spot on the map at Beryozovsky might be one. Armed with the computer we set out for this blank space. It turned out to be a park but further research suggested there was another space which might be a gold mine. A statue of a miner suggested we were in the right area. 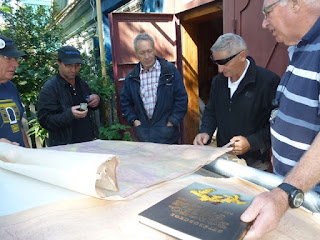 Then we met Pyotr. What do you want to see? Rocks and gold mines we suggested. Ok let’s go, in typical Russian fashion. No secrets here, look around. What else? You want to see museum and maps? When we showed that we knew about rocks the doors opened. Ok! Lets go. Leva (turn left). Naprava (turn right). Priyama (straight ahead). He took us to his home and offered us old geological maps of the region. Then to the Gold Museum. This was closed but he knew the staff so he found them and they gave a us a tour of a well appointed gold museum. Then to another head frame that was hauling rocks from underground and producing aggregate. 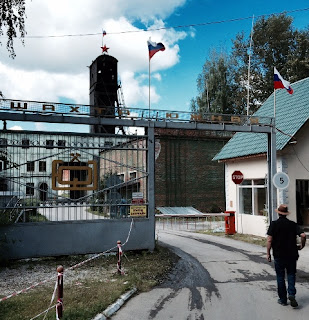 We wanted to take him to lunch at a local restaurant but he insisted on us having a miners lunch. So we did. It cost us $2 to buy him 3 courses at the stolovaya, the miners’ canteen (even the suits eat there). 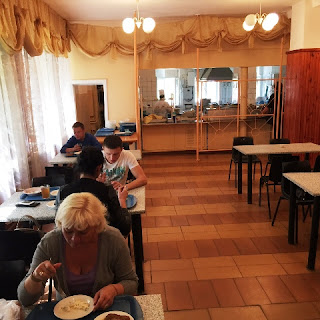 We wondered on the drive back to Perm what sort of reception a bunch of old Russian rock-hounds would get if they just drove into an Australian mine.