The roads are starting to take their toll on the cars. Are we going to make it? Ian Neuss 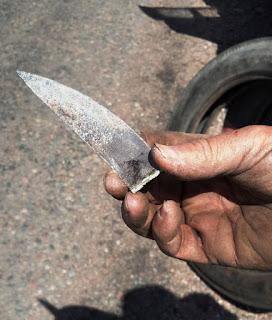 The roads of China, some good, some rough, with free floating concrete slabs, started it off. The hills and mountain passes were not a problem. We took three to four thousand metre passes in our stride. Kyrgyzstan’s back roads were rough to very rough and took a toll on the wooden wheels which needing tightening and some care to minimise the wear. The rear wheels spent the winter in Almaty in turps and linseed to swell the wooden spokes. The photo shows a blade retrieved from INSIDE a tube of the Whippet in Kyrgyzstan.

Kazakstan, Uzbekistan and Turkmenistan added to the wear. The roads in the more remote parts could turn to crap at the drop of a hat, pot-holes you could hide a car in. Azerbaijan roads took more toll on the tyres with the Dodge doing two tubes as the roads, and the corners were deceptive. Georgia was a breeze, nothing but fair wear and tear, although the cobbled roads in the old city were a bit rough.

Russia has been good until the M5. Good roads to the outskirts of a city then there is some jurisdiction problems or shortage of taxpayers. The M5 meant we dropped our hitch-hiker Sergei and detoured north to Naberezhnye Chelny and a new adventure. From Perm west to Saint Petersburg has meant we have taken some diverse roads to take the shortest way.

The roads in Russia suffer from the presence of large areas of swamp, and very large trucks, which means the roads are rutted and sinking. The heavy trucks make tracks in the road and the old cars go wherever they want. It takes a bit to keep them on the road. It also knocks them around. 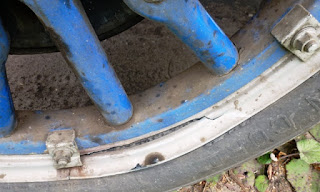 The Dodge has split a steel rim in the last two days. It needs attention. The rear wheels have needed tightening and straightening to get them to run true. The tyres are showing considerable wear. The front ones on the Dodge are not too bad as all the weight is in the rear and those tyres are bald from carrying the weight and doing most of the work. (Photos) 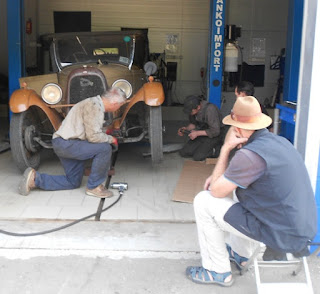 The Whippet has had big problems with the roads. On the M5 it snapped a front spring. Coming west on the P98 from Kirov it’s done a front spring again. The rear wheel is getting loose too. We had repacked the loose spokes with grommets but these fell out and are now trying steel paste to keep them tight. The photo shows Ian's expert supervision of Bill and local mechanic at Kostroma. 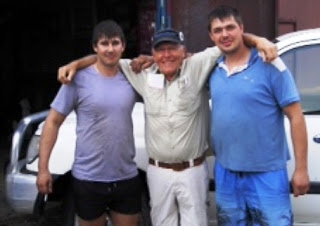 Not to be outdone, yesterday the Toyota’s generator packed it in and ran down all 3 batteries, just making it to the door of an auto electrician in a back lane on the edge of Cherepovets. The local mechanics and electricians really rallied to the cause, tearing across town for parts, and working odd hours, and absolutely refusing to take a cent more than 2300 roubles for the job, about $60 AUS. Thanks Alexei and Alexander.

Are we going to make Helsinki? By road or on the back of a truck? Either way we will.