Bill's Blog 1 (for rev-heads and tinkerers) 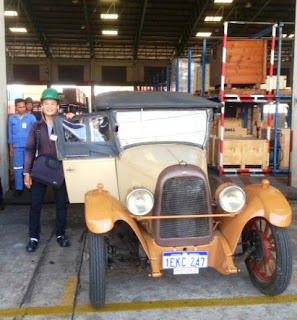 An adventure is when the unexpected unknown comes out of the blue, or out of the dust in the case of the Taklimakan Desert. And the B2B has been an adventure from the first day in Bangkok where the Whippet cleared customs, started first kick and loaded without a hitch, then travelled to the border in one day, to yesterday’s Turkish bath in the basement of this excellent hotel where an ugly chinaman, after putting out his cigarette, nonchalantly scratching his nuts, took a pot scourer to my somewhat less than clean body. A slightly pinker but very clean Bill presented for dinner in full B2B regimental dress an hour later, feeling a million dollars. Expect the unexpected!

Although the continuum of adventure is fantastic I think the most pleasure I have had to date is seeing a near instant sequence of expression on the faces of young kids from; true disbelief, amazement, repeated disbelief and then shear delight when they see the old cars appear in their village. The adults have equal pleasure but are not quite as expressive until they see the wooden spoked wheels which they always tap, feel, then laugh and give a thumbs up. 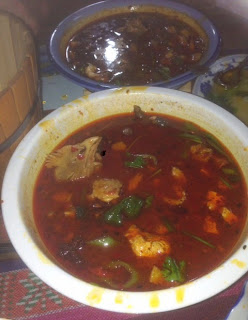 Our cuisine has been superb as one would imagine and reported by our resident food and wine writer (MN) but I must include the red date and chicken head soup from Sichuan shown in accompanying photograph, the chicken head and chicken feet being quite obvious.

No doubt there are petrol head vintage blog followers who are interested in the vehicles mechanical progress and would like some more detail. My conspicuous absence from blogging may reflect that I have been attending to things mechanical and not literal. So an attempt to satisfy those is made here. Both Dodge and Whippet continue to continue on and seem to be improving with every mile possibly because we have now slowed the pace by around 5 mph to around 35, this requires less fuel, less heat and not much more overall time. 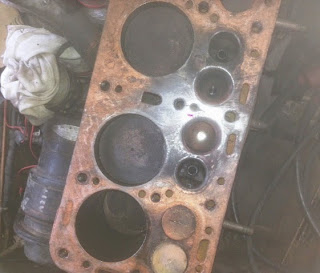 The heating problems of the Whippet were because it left Australia with an exhaust leak between number two and a water way after a particularly vigorous test drive, possibly something the previous owner Stan Perry had repaired. The replacement, suspected head gasket, didn't arrive until too late and was never fitted. This should have been changed on the wharf in Bangkok but I didn't, and made the car labour over the ranges through Laos, overheating on some of the long climbs, and me swearing to change the gasket at the first opportunity each time we tipped cold water into the hot engine. This we addressed at Lake Lugu to find the gasses had cut a valley in the block about 5 thousands of an inch deep, just too much to be taken up by the new head gasket. So I annealed an old copper one and pulled the head down harder to reduce the gas in the water to a small stream of bubbles and planned to find a reco shop that could weld or skim the block in situ.

An initial search in Xichang found a mechanical shop who were unwilling to do the work but sold us a special copper coat high temperauture head gasket spray, something I had not seen before and but they strongly recommended. So the head was removed again to find a small crack had also developed in the block from the water way, which I drilled to stop it propagating further. We annealed an old copper gasket on the primus stove in the hotel car park and torqued the head down again using copper coat gasket cement to 65ft/lbs. This did not fix it to my satisfaction so we by-passed the mechanical work shop and went to the machine shop directly.

These guys were well fitted out with mills, lathes, presses and most importantly, experience. They also had a mechanical and spray shop next door where I did the work with assistance from the local boys. I cannot say I enjoyed the work but I did enjoy working with the enthusiastic Chinese lads. The Whippet suffered the indignity of being towed through a busy town by the Toyota to this shop. On arrival the head mechanic recommended patching the block by cold welding a thickness of shim metal over the depression in the block in stages which we ground down slowly by hand with a grinding wheel. This I had never seen before but it seemed plausible. We rubbed in the valves on two and three, and had the radiator flushed and reassembled. I poured in my supply of new oil, only to find gas still in the coolant. Not too happy I may say. We then torqued the head down to 50 ft/lbs and stripped two threads in the block. We removed the head once again and used the 7/16 helicoils and new set of head bolts I had brought with me. Torqued the head down to 70ft/lds and, at last, no gas in the exhaust.

On a rigorous test drive with my delighted Chinese offsider in the passenger seat we found still too much heat but basically acceptable if not driven at full throttle even on this quite hot day. I retarded the ignition somewhat although the engine was not pinging this seemed to help too. We had only flushed the radiator as I would not let them strip the top tank off and rod it, and was still quite concerned about the stop leak (I had put in in Australia) stopping flow in the radiator. 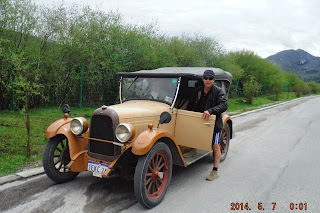 Peter had carried a spare radiator, taken from Ted the other whippet, with another wheel, in from Australia which we fitted before tackling the big climbs onto the Tibetan Plateau. On the first day with the new radiator the ambient temperature was very low (see photo) and the engine temperature never exceeded a 120F, which I felt was somewhat damaging to be developing full power and revs on a cold engine all day. We then covered the radiator with a pillow slip and operated at 160-180F and happily (apart from having to back out of a motor way 2kms as we had overshot the turn off) progressed toward Xining. The car is now returning 6kms/lt and running well.

After dropping down into the Taklimakan some 2000m we have reduced speed and the whippet is returning 7kms /lt which I think is consistent with what this car can do. Unfortunately I think I can hear a big end knocking at low revs and the engine is using a pint of oil a day on the long runs across the desert and some blow-by is evident in the breather.

We have now run out of the Penrite 40-70W oil and have changed over to a synthetic 20-50W, oil pressure is still good at 30psi, but the knock still( just) audible, and we will see what the usage is like (just put in a Wynnns product) climbing out of China tomorrow. The water pump requires a tighten every day or so but all else is fine, gear oil still fresh (now nearly 6000mls travelled) diff oil black but full, rear uni will not hold oil but quiet and cool running, front uni greased, thrust bearing talks occasionally, the timing chain is just audible. So lets hope the next 500mls are as uneventful mechanically as the last.

I think everyone enjoys driving the little car which responds well when required to keep up with the better pulling power of the Big Dodge and handles well on the tight steep roads.