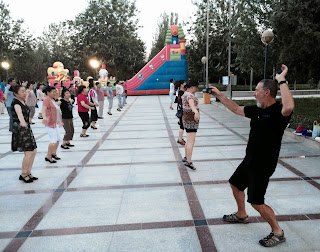 We stayed 2 nights in a swanky hotel (the first since we began the trip 6 weeks ago with a 20 metre pool) in Qiemo . On the way back from dinner I began videoing a group of 50 Uygur (Chinese pron. - weeger) dancing the evening away in a local park, a regular event all over China. However the dancers were so intent on their routine I could not get them to smile. So quick as a flash I thought I'll do my Fred Astaire number. They must have been very impressed because not only did some of them break into peals of laughter, just after this photo was taken, but several cried, both expressions forever captured on digital camera.