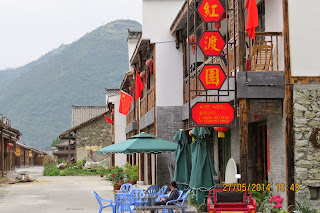 Shimian is a town strung out along both banks of the Dadu River, in a typical mountain valley. It looks like a mining town and could have been in any mining area of the world. I almost expected to hear banjos.

Just south of Shimian is a village with a bit of a difference. As the site of a famous, and difficult, river crossing by the Red Army in retreat from the Kuomintang in 1935, during the Long March, it had been a Chinese tourist attraction. Eventually, in the 1980s, the village was renovated with a combination of traditional wooden buildings and new housing and memorial hall, around various historic points such as a house that Mao had lived/stayed in, a machine gun post, the site of the river “ferry”, the Red Army Command building, museum and monument. 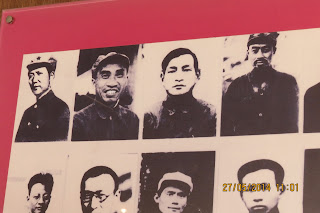 The museums photos include this one of (top row) Mao, General Chu Teh, unkown, and Chou en Lai.
Posted by John McCombe at 07:19