Jiayuguan and the Great Wall of China 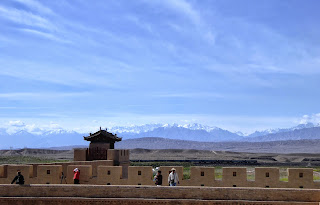 No, the Great Wall is not exclusively just outside Beijing. Remember that it consists of about 25,000 km of “wall”. And Jiayuguan, the Jiayu Pass, is at the western end of it.

With a great mountain range, the Qilian Shan, to the south, and a lesser range and the Gobi Desert to the north, the wall ended with a fort at a strategic defensive position for western China on the Silk Route. Its construction started in the 7th century BC and continued for 2000 years.

We also started to pick up the story of the pilfering by 20th century European and American archaeologists, including Aurel Steins priceless contribution to the already impressive collection of plunder in the British Museum. There would be more of that story to come, now that we have reached the desert.