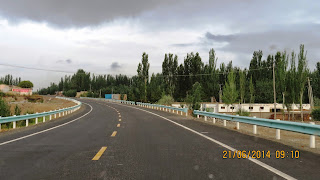 China always seems to surprise. We are on the edge of a forbidding desert, the Taklamakan. There are some dotted blue lines on our maps, running from the mountain range in the south and petering out in the desert. Their source is the Kun Lun Shan, rising to over 7000 m and forming the northern boundary of Tibet. Permanent snow and glaciers provide a constant, though modest flow. Then there is the seasonal rain, mostly in summer, and the occasional storm from the west. The Taklamakan occupies what is known historically and geologically as the Tarim Basin. The waterways run into the basin, disappearing via irrigation channels or feeding aquifers. The cities, towns and villages along its edge are located at oases, areas of green, orchards, gardens and trees, both desert natives such as desert poplar, and many such as poplars and bamboo (yeah, yeah, I know, it’s a grass not a tree), planted along the road for beautification and wind and sand breaks, and harvested for building timber. We left Minfeng at first light, expecting that we would see a lot of desert and maybe a few small oasis villages. 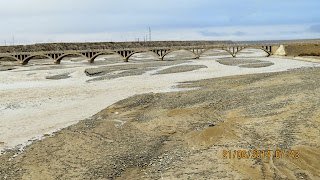 But it’s summer, with a grey, overcast sky and a cool breeze after a big storm last night. One town had a flooded street. The highway is elevated about a metre above the surrounding plains, but the avenue poplars were standing in water alongside. Eventually all traffic stopped. People had left their cars and were wandering in the desert (prospecting for jade?), and some cars were a couple of hundred metres away from the road. Hundreds of cars, trucks and buses were held up in each direction as heavy machines pushed half a metre of mud off the road. Time to try out the off-roader -- a bit of Paris-Dakkar. The Toyota’s 4WD got us through the greasy former waterways, but several adventurous drivers were sunk. The classic cars, further back, claim to have negotiated the desert. These claims are unconfirmed by photographic evidence, though will no doubt be trumpeted in the corporate media. Chinese truck drivers are very skilful, but impatient. If you want a break in traffic to get back on the road, follow one of them.
Posted by John McCombe at 19:47