Onto the Silk Road 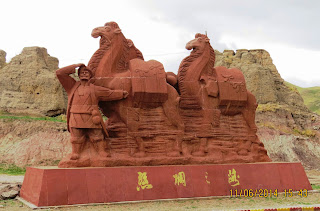 Zhangye, Gansu Province, Thur 12 June 2014. Over the last 2 days we have travelled up the southern green corridor of the Silk Road, from Xining to Zhangye, crossing the Datong Shan and the Qilian Shan, mountain ranges that took us over 3 passes between 3600 and 3800 m altitude. To add to the atmospherics of unmelted snow on the streams and northern slopes, it started to rain as we left, and just got heavier. The Dodge and Whippet crews earned their hot showers those nights.

The buddhist grottos at Matisi Se (constructed between 317-420 AD) and Zhangye's great reclining Buddha and its surrounding wooden temple, over 1000 years old, remind us of the role of the Silk Road in bringing Buddhism from India to China over centuries. In the last 7 weeks we have crossed the seaward flowing Mekong, Yangstse and Yellow river systems and have now reached those systems that flow north, through rich, fertile plains, before petering out in desert. This will be the pattern through the Central Asian Silk Road route.
Posted by John McCombe at 13:31