The little village of Lahic is about 150km from Baku and is reported to be one of the charm villages of Azerbaijan. It's 20kms off the main road and you drive along a river valley through little villages and beautiful oak forests. The valley narrows and the road becomes rougher until you are driving on gravel with massive vertical mountains either side; very spectacular. 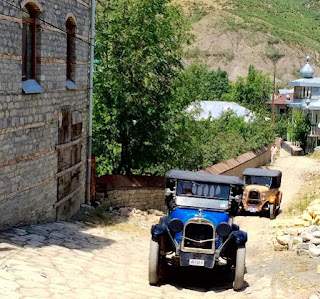 One km from Lahic a sign directed us along a dry river bed on quite rough river stones. After about 2km the track wound it's way into the village and after asking directions a few times we arrived at the really nice Lahic Guesthouse. It's a cross between a B & B, small boutique hotel and guesthouse. It is owned and operated by Rustam, a 67 year old former mechanical engineer who was at one stage during soviet times the assistant to the Deputy Prime Minister of Azerbaijan. This place has been in his family for many generations and in 2006 he proceeded to rebuild the old stone place and build 9 ensuite rooms. We had a lovely home cooked dinner and a fascinating talk with Rustam.

The village is at 1300m and has a very appealing micro climate; cool in winter and not too hot in summer. The day we were there it was in the mid 20s and very pleasant.

Before soviet times Lahic and surrounds were 10 times bigger with about 10,000 people. The soviets were disastrous for the area with many people gradually moving away and others sent to Siberia and Gulags with only about 5% returning. Pre-soviet the town had many small artisans for which it was renowned. Nevertheless, the soviets gradually rid Lahic of those artisans and the 'intelligentsia'. We saw in the dining area lovely metal handicrafts from the old days including some 18 century guns and knives which Rustam said were actually made in the village. Today, there is only a blacksmith; mainly for tourists. 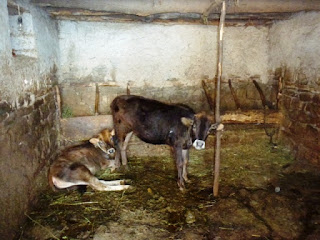 Walking around Lahic it was interesting to see cows wandering along the narrow streets made of smooth river stones but with no grass anywhere. Then I saw it; an open door under a house revealed 2 cows eating hay in the semi darkness. Some things never change. 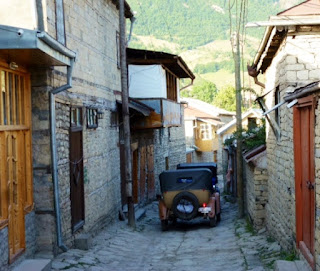 After a good breakfast of porridge, yogurt, omelet, bread and coffee we departed with Rustam in the Dodge until the village outskirts. The streets were very narrow, just wide enough for the blue Dodge, brown Whippet and white Toyota to crawl along. Instead of driving back along the dry river we drove right through the centre of Lahic which was just waking up. We saw the wood man with the donkey delivering wood, and the bread lady putting out her fresh bread. 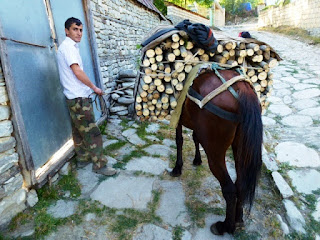 A very interesting overnight stop in lovely Lahic with excellent accommodation and food, and a very engaging host.