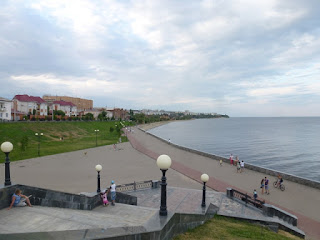 Our hotel commands a dominant position over the mighty Volga. Here the river is a couple of kilometres wide. Freight ships and barges steam up and down. We have favoured 8th floor front rooms with water view. The hotel was the best in town when it was built in the first flowering of private enterprise in the early ‘90s. The location demanded grandness. This would be a ‘field of dreams’, a Convention Complex to which all would come. However, being built of the cheapest material available, and with the cheapest of unskilled labour and apparently not a tradesman in sight, it is now barely holding together. Two hundred rooms, mostly empty.

The security man is an unsmiling six footer with grey military crewcut. He is straight of back and broad of shoulder with a look that says I have killed many men so please, no Australian humour. But he turns out to be quite genuine in his concern for the security of our cars. The lack of windows and lockability at first horrified him, but he gave in to curiosity and our subtle camouflage of a simple car cover. And it's only for one night. 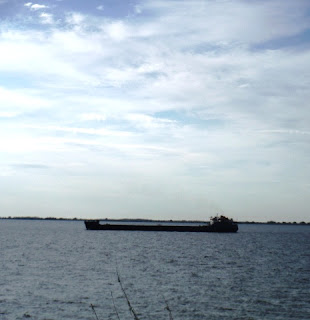 BTW Kamysin is home to FC Tekstilshchik Kamyshin
Posted by John McCombe at 09:16