How not to arrive in Azerbiajan! Michael Noyce

It's 9am the day after we arrived at Alat port on the Shahdag and I am writing this blog from the breakfast restaurant on level 18 of the Baku Holiday Inn. I am looking down over Baku Port and can just see the 2 old cars in the distance with their covers on and impounded in the Baku Customs compound.

So, why are the cars sequestrated below and what led to this situation? Read on and see if you agree that this must be one of the most fascinating entries into a country that could be imagined; seemingly more fiction that fact, but nevertheless, just the facts. 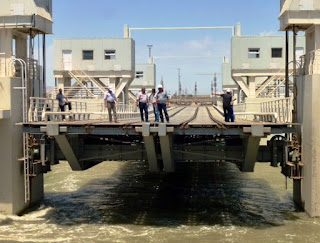 Almost as soon as the ship docked at the Alat terminal guys walked on board and started measuring the cars. No-one spoke any English other than a few numbers and the word 'dollars'; somewhat ominous I thought. All the head guy could say was "one hundred dollars a metre". We quickly did the maths and the total length of our 3 cars was 10.80m; much money was now at stake. We were protesting a bit which probably only aggravated the head guy who was pretty stroppy and frankly quite rude, but it was his country and he made the calls.

The next surprise was that through the German father, who learnt some Russian while in the army 40 years ago, the head guy made it clear that we would have to go to Baku, pay the money and get Customs clearance before the cars could be driven off the ship. That would mean coming back tomorrow to pick up the cars. It was becoming quite ridiculous and the head guy even more agro.

Then the Captain appears and he looks pretty cool. He has shaven, is wearing a red Ralph Lauren T Shirt and white slacks. I explained the situation as best I could and he does, I think see the absurdity of what the head guy is demanding. Much talking and hand gesturing now between the Captain and the head guy and after a few minutes the Captain nods to me and I saw that as meaning; it's OK. He says "No problem". The head guy now measures the vehicles again and this time tells us "Eighty five dollars". From $100 to $85 in only a few minutes of the Captain intervening and I am thinking we might get away with this for not much at all.

This is what we need to do. Chris, the German father is to go with the head man in his car, basically as a hostage Chris says. The rest of the cars will follow in convoy for 75km at no more than 60kph where the limit is 120kph. So, the convoy order is to be the head man and hostage, Bill and the Whippet as it's the slowest and will set the pace for the head man, then the Dodge, then the German son driving the red Fiat and tail end Charlie is the Toyota.

Can you imagine the absurdity of all this. But it gets much worse and becomes an unmitigated farce, as you will see. All because of the lack of processing procedures and facilities at an international ferry terminal!

By various hand waving the head man directs us to immigration, about a 10 minute walk. Up we go and being a passenger I am the first through with Gerry the nominated Toyota driver. This takes about 20 minutes and we are directed to the Ports office and each pay US$10 Port Tax. We go back to the ship, Gerry backs off the Toyota and we are directed to Customs about 300m away. A customs guy directs us over the pits, but they seem little interested in the Toyota or what might be in it; A sniffer dog comes along and few sniffs and he is gone.

We wait and wait and it's approaching 4-30pm. Then in the distance we see the Whippet emerging off the boat and soon the blue Dodge. And now the photo opportunity for the Customs boys starts. They don't even put the old cars over the pits or let the sniffer dog loose; just photos, photos, photos. 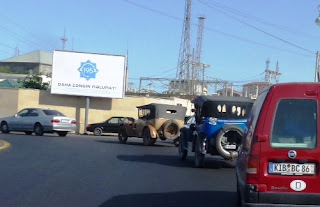 We line up in convoy with Chris the hostage in the head man's E Class Mercedes in the lead. He is living proof that thieves do in fact prosper. And we start; only 75km to go and it's approaching 5pm. It's a nice trip up the coast, parts we did not anticipate seeing, but nevertheless we do enjoy this opportunity that few tourists experience.

We approach Baku and turn off the 8 lane freeway. The lead Merc stops. He is lost and the chatter over the radio between us is less than flattering. Now it's well after 6pm and whats the guy trying to do? After all, we have an hotel to get to.

We are driving in Baku with tall glistening glass multi stories mixed up with the old town and run down slums. We stop many times for directions and also because we are in peak hour Thursday night traffic and some roads are closed due to the European Games. We are getting spread out and the call comes from Bill "Can't see you, close up close up. I am stopping" and hopefully the lead Merc stops too. Ian calls out "Billy, my brakes can't take much more of this" but our big fear is the Whippet running out of petrol in peak hour traffic in downtown Baku. Yes, it's a very real concern. We seem to be going around in circles and didn't we go past that building 1/2 an hour ago?

We approach some gates, the Merc stops and the head man talks to someone. Through the convoy goes and stops outside a kind of demountable office. We go inside and each of the drivers must pay the amount based on the length of the vehicle. It takes about an hour and then the head man says we have to wait for the Customs people. But weren't we cleared by Customs 7 hours ago at Alat?

We wait about another hour and the head man then advises that we must drive to Customs about 4km away. It's utter madness and Chris suggests that only the drivers go in the Toyota and that the old cars stay with the German son and I. And this is what happens and we can even see the Holiday Inn, our hotel a few hundred metres away. So close but so far.

In the end it seems that whilst we as individuals have a 30 day visa the cars must leave the country within 3 days of clearing customs. Try working that out. So, the boys reach agreement with Customs to leave the cars impounded for at least another day and we arrive at the hotel about 9-45pm for a 10pm dinner.

The sequel the following day is that the boys went back to Customs, paid the US$20 road tax per vehicle and all is ok. The Germans drove their Fiat out and will leave for Georgia the next day, and we will leave for Georgia in 2 days. A hellava frustrating drama that is nice to reflect on but not so good being in the middle.

And that's how we come to be in Baku, Azerbaijan, the venue for the 2015 European Games which closed 2 days after we arrived. Welcome to the Games city; it's a bit like Sydney 2000. Yes, true.
Posted by John McCombe at 14:17