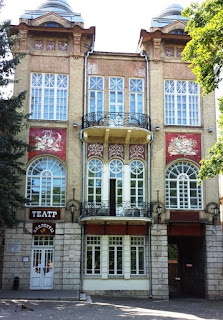 After the decaying infrastructure and slow pace of modernisation seen in the former Soviet republics so far, Russia provides a contrast. Once you get past the numbing indolence of the border officials you get quite a surprise -- Russians are just like everyone else! Yes, I know it's a shock for those of us from the Cold War generation, but they are friendly, helpful, especially considering that our Certificates from the Sydney University Summer School in Russian 101 have hardly turned us into Tolstoys or Pushkins. Ask for directions and someone says 'follow me' (or something), use an App to say 'I've got a cold' and the Ápteka (pharmacy) people offer a remedy, when the friendly policeman pulls us over (I think because he can't believe the cars and wants a closer look) and we ask for directions to Stavropol, he draws a map.

The cities (Vladokavkaz, Pyatigorsk and Stavropol so far) are green and pleasant. The streets are clean (except for a missing grate above a large well on the road in Vladikavkaz) and signposted, the traffic is considerate (so far), there is a mix of old architecture (one can imagine the literary elite of Tsarist Russia enjoying the theatres and galleries of the old spa town of Pyatigorsk), the Orthodox churches stand shining and proudly open in all towns. 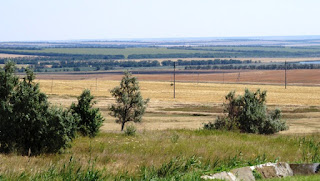 For the first 3 days we drove through summer harvesting of fruit, vegetables and grain crops. We agreed there was a ‘Darling Downs’ look about the place, but greener. We talked (English) with a young grain exporter who confirmed the rich productiveness of this area (Rostov, Krasnodar, Stavropol). As we drove north east, heading for the Volga River we agreed a ‘NSW western slopes’ look – gradually browning. By the time we get near the Volga we’re in the Mallee – still broad-acre crops, but needs rain.

This is the famous Russian Steppe. In the winter of 1942-43 it was the scene of the most decisive battle of WW2. Over 1 million died as the German 6th Army was surrounded and defeated between the Don and Volga Rivers in the Battle of Stalingrad. More on that later.
Posted by John McCombe at 18:02