Gori is a Georgian city about 75 km north west of Tbilisi and not too far from the disputed border areas of South Ossetia and Abkhazia, both occupied by the Russians. Although it has quite an ancient history it is better known in recent times as a city captured by Russia during the 200B war, and as the birthplace of Joseph Stalin and the location of the Stalin Museum. It's hard to believe that during the 2008 war the Russians actually advanced to within 25 km of Tbilisi. A number of towns in Georgia were bombed including Tbilisi airport. 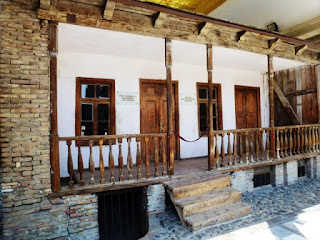 John McCombe, Mike Leggo and I spent a fascinating few hours driving to Gori and looking through the Stalin Museum. The first thing you see when walking into the Museum grounds is a big green train carriage which was Stalin's personal carriage on his trips to the Yalta and Tehran conferences during WW11. We walked through the carriage and could see Stalin's bathroom, bedroom, study and conference room. Before you actually enter the actual Museum, under a large roof like structure is the small wood and mud brick house where Stalin was born in 1878. 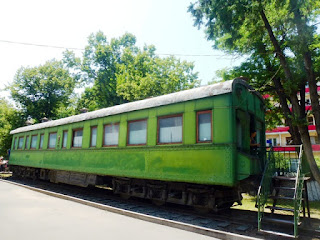 Given the impact of Stalin and Russia in the last 100 years it was fascinating to go through the Museum that was built in 1957. It's not just a museum about Stalin and whilst there is more focus on him, it basically takes you through the history of the socialist movement. 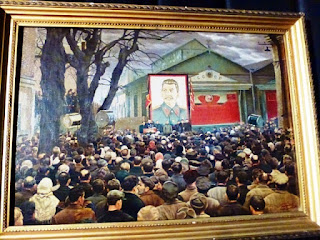 There were quite a lot of people going through the Museum and we joined an English speaking tour. There is undoubtedly much interest in Stalin, as well there should be given his impact on the world. As Churchill reportedly said, Stalin took Russia from the plough to nuclear power.