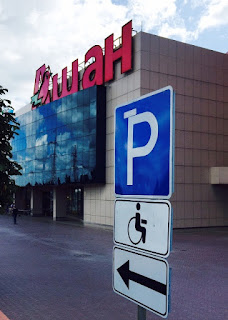 One of the back-up Toyota’s duties is to replenish supplies, necessities like beer, wine, and water. We wheeled into an almost empty car-park at the French Achan complex at 9.30am. The place doesn’t really get going until 10 so we had our choice of parks and picked a shady spot up close. Sergei chose to stay with the car. 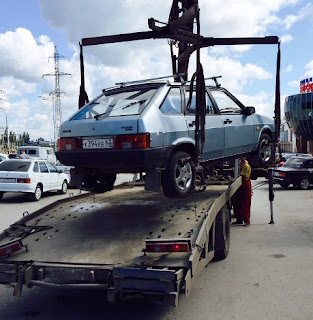 Forty five minutes later we returned to see a nearby car being hoisted onto a flat-tray truck. Their tow-away zones don’t muck around. It’s straight onto a truck and gone. We had previously seen a fleet of 5 trucks go to work in Saratov. And we had parked in a disabled driver zone.

Sergei had been trying to phone us but on our shopping list was a re-charge of our depleted SIMs. He had deterred the car lifters 3 times by pretending not to speak Russian. He’ll make a good economist someday.