Syzran and the Paparazzi Again 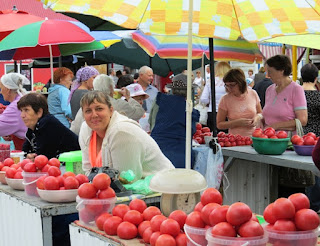 Syzran is an old fortress town on the Volga with a tower remaining of its 3 century old kremlin. It also has a very old monastery and church and the local market, full of very large fish in various states of freshness and drying that we were assured were all from the nearby Volga. It’s a pretty little town that is seeking to better itself.

It being lunch time we decided to try the local popular Lada drivers cafe lunch spot (John has this theory about Lada people, more later), the Stolovar, the peoples’ restaurant, after leaving the vehicles in front of the local government offices, under Lenin’s care. 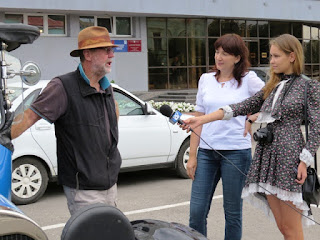 We returned to a crowd and TV reporter (who seemed to take inspiration from Borgen’s Katrine Fonsmark) who wanted our life story. Sergei filled in for our incompetence in the Russian language and gave a long and, we think, embellished version of our mission. Ian was then interviewed with a local translating. After more photo shoots and group photos and farewells we were allowed to leave if we promised we would come back sometime. Mike says he got a promise of an email link to the TV broadcast.

Apart from the fun of it all the real takeaway message came from the translator. She sincerely, even emotionally, welcomed us to Syzran, saying how pleased she was that we had chosen to visit. She emphasised genuinely that the Russian people only wanted PEACE, and that they were proud of their President Putin and what he was trying to do for their country.