Volgograd – the Battle of Stalingrad 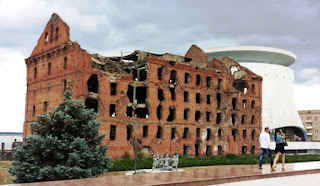 If you have ever visited the Australian War Memorial in Canberra you are ready for the reverence afforded the memorial to the Battle of Stalingrad on Mamaev Kurgan, aka Hill 102, the highest point in Volgograd and scene of some of the most desperate fighting as German and Russian exchanged control of the high ground. 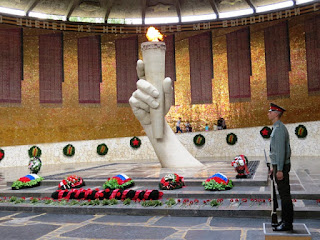 Over one million Russians were killed in this one campaign, fighting back after the city was virtually destroyed in the initial German attack in the summer of 1942. The whole population was mobilised to fight street-by-street, building-by-building, even from floor to floor. Every German attack brought a counter-attack and eventually a full-scale assault, in wintry November 1942, which surrounded and isolated the German 6th Army on the plains (steppe) west of Stalingrad/Volgograd. With huge loss of life from fighting in freezing conditions, the battle was over by February. It was a massive blow to Hitler’s army and a major turning point of the whole war. Russia lost 25 million people in WW2, Britain 400,000 and the USA 330,000.

There is an inscription in Russian: ”Years and decades will pass by. New generations of people will appear. But grandsons and great-grandsons of the heroes will come to the majestic memorial monument of Great Victory. They`ll come with their children and bring flowers. Here, thinking of the past and dreaming of the future people will (remember) all those who fell ... defending the eternal flame of life”. And they do. Children lay flowers, old men kneel, cross themselves, and shed tears. We saw them. 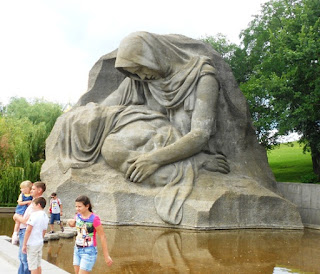 This sculpture (right) symbolises all the mothers who lost sons, husbands, brothers, fathers in the war. The pond at her feet is a lake of her tears.
Posted by John McCombe at 19:15