Driving out of Kamysin we decided to pick up a young hitchhiker and found he had more English than we had Russian and we haven’t let him go since. Sergei is a 22 year old Economics student who, having finished his year of Army service, wants to see his country. He is hitching from his home near the Black Sea to Lake Baikal, a mere 8,000 km, and dropping in to see former Army mates on the way. He has willingly included us in his mission and is determined to share the best of his own exploration with us. 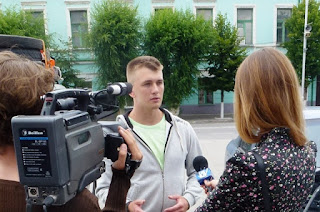 So far we have benefited greatly and worked the poor bugger to death. We have subjected him to riding in the Dodge in the rain and endless questions. He has maintained good humour and has opened doors that are well beyond our Russian 101 and 102, explaining our ambassadorship to Russia and our exalted status at home (at least with our spouses). He doesn’t drink and insists on paying for his own food, taking his turn at camp cooking, and steering us into many discoveries, both historic and culinary.

The photo shows him hard at work explaining our mission to an incredulous TV reporter in Syzran. More on that later.