The car devotees of Tbilisi

It’s no surprise that the two classic cars attract stares, waves, photos and general delight wherever we go. However Tbilisi provided something really special. We found a card dropped at our hotel with a request to call someone interested in the cars. Bill, being the diplomat, gave him a ring and in no time Mamuka Khoshtaria was there in his yellow submarine (a Moskovitch)) and told us of his desire to build a Model T Ford. He wanted to look at our wheels, and could he tell his friends, and could they come and have a look? 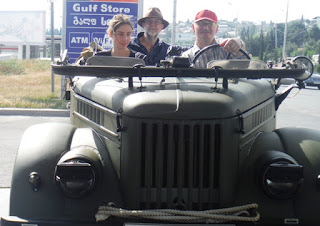 And his friends arrived, the whole Military Vehicle Preservation Association, in their cars, then Georgian TV, the Tbilisi Motor museum and a few other lookers. They were all rapt. There are no old cars in Georgia, they weren't allowed by the Russians, and if one was around it was probably sold during the civil war to provide sustenance for the family as there was little electricity, food or water during those times. 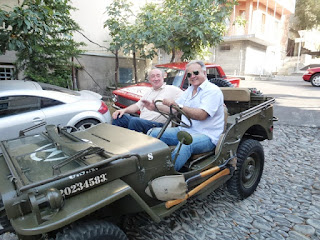 Merab Gujabioze has been in love with Willys Jeeps and has longed since childhood to restore one. Bill’s Willys Overland Whippet is the grandfather of the US army jeeps so it was pride of place with Merab. He is also President of the MVPA, and just happens to be Professor of Architecture at the Georgian University. Mamuka and Merab are shown here in Merab's Jeep. 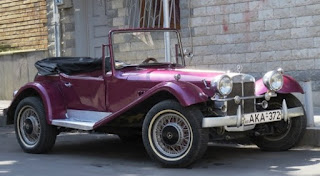 Merab took us to the car market to get Bill’s radiator shroud repaired and to buy oil and grease. As a bonus we were given a bottle of grappa. Mamuka arranged access to the garage of a master mechanic for Bill to replace the clutch in the Whippet. They took us to the Tbilisi Auto Museum and explained all the soviet cars and bikes restored and under restoration. Worth a visit.

We had a trip up and down the main street of Tbilisi for Georgian TV, filming, flashing lights, stopping the traffic, get out of the way this is important. We did interviews overlooking the city, providing a majestic backdrop. 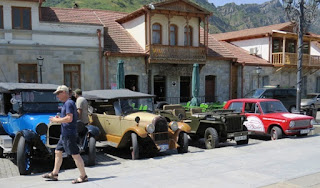 On our last day, as a finale, they escorted us out of town with a few other car fanatics from Tbilisi. We had the Jeep, a ’38 Mercedes Benz, a Land Rover, and the Auto Museum’s show piece Lada. No problems. Roundabouts: stop the traffic. Corners: stop the traffic. We thought the police escort coming into town was good but they had rules. These guys didn’t, just ask and most drivers obliged and let the convoy pass unbroken through any light or corner or roundabout.

On the way out of Tbilisi they took us to the old capital Mtskheta where we drove through every barrier to the entrance to the Svetitskhoveli Cathedral and Monastery. They made sure we were on the right road to the Great Caucasus and Russia and bid us farewell.

If you’re interested in cars we can recommend a visit to the Auto Museum, and contact the Military Vehicle Preservation Association to meet fellow car fanatics in Georgia.